University of Chittagong situated on about 1754 acres of hilly land in mouza Jangal Paschchim-Patty of Fatehpur union under Hathajari Upazila, 22 kilometre north of Chittagong city. This is the third largest public university of the country. The academic activities of the university was formally began its on 18 November in 1966.

From the beginning of the 20th century the enlightened section of local people was pressing to set up a university in Chittagong. Considering the long felt requirement on 28 December 1940, Moulana Muniruzzaman Islamabadi disclosed the news of construction of the Islamic University in Chittagong while presiding over the conference of the All India Jamiate Ullamaye Hind in Kolkata. He also bought a land for that purpose in the Deyang Hills under Anwara upazila of Chittagong district. On 28 February 1942, lawmaker Nur Ahmed formally placed a demand in the Bengal Legislative Assembly to establish a university in Chittagong.

The government of Pakistan took up a decision to set up a 'Science University' in Chittagong during the 2nd Five-year plan period (1960-65). The Chittagong Government College campus in the heart of the port city was selected as the location of the new university. Fazlul Kader Chowdhury of Chittagong during the 1962 elections gave a commitment to establish a University in Chittagong. And he initiated the move accordingly later after becoming the Education Minister. 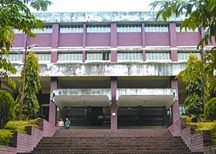 Meanwhile on 29 November 1963, Fazlul Kader Chowdhury was elected Speaker of the Pakistan National Assembly. In absence of President ayub khan, on 12 December 1963, he presided over the cabinet meeting as the Acting President and asked the central Education Minister ATM Mostafa to take all out measures for setting up of the third public university of East Pakistan in Chittagong. Necessary grants for the construction of Chittagong University were allocated on 9 March 1964 in the meeting of National Economic Council, which was also presided over by Fazlul Kader Chowdhury. A site selection commission was formed with the Vice Chancellor of Dhaka University Dr M Osman Ghani as its chairman and Dr Qudrat-e-Khuda, Dr Muhammad Shahidullah, M Ferdous Khan and Dr Mafizuddin Ahmed as members. The Commission after making physical inspection recommended selecting the solitary hilly area of Jangal Paschim-Patty mouza of Fatehpur union under Hathajari upazila as the site of Chittagong University. The National Economic Council in its meeting on 17-19 July 1964 held in Islamabad with Acting President of Pakistan Fazlul Kader Chowdhury in the chair decided to set up the University of Chittagong there following the recommendation of the site selection commission and gave final approval of the government accordingly. President of Pakistan Ayub khan laid foundation stone of Chittagong University on 29 August 1964. 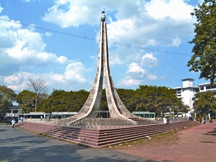 Professor of History, University of Rajshahi and Ex-Curator of Varendra Research Museum Dr Azizur Rahman Mallick was made the Project Director of Chittagong University on 3 December 1965. He set up the project office of the university at a building 'Kahkashan' on road no 3, Nasirabad Housing Society, Chittagong. All the officers and staffs of the university wing, Department of Education were transferred to the Chittagong University Project office through a gazette notification issued on 14 December 1965. A master plan of the university was prepared through 'Bastukala', an organisation led by Architect Mazharul Islam. Initially a two-storeyed administrative building, departmental offices, classrooms and a library building were built. Student hostels and a teachers' dormitory were also constructed in the first phase.

Dr azizur rahman Mallick was appointed as the first Vice Chancellor of Chittagong University through the Chittagong University Ordinance promulgated on 25 September 1966. The Chancellor of the University and Governor of East Pakistan Abdul Monem Khan formally opened the academic programmes on 18 November 1966. The classes of M A (preliminary) of Bangla, English, History and Economics departments under the Faculty of Arts began first from 18 November 1966 with only 200 students and seven teachers. Dr Abdul Karim joined as the Reader and head of the Department of History while Mohammad Ali and Dr Shafiul Alam were appointed as Reader and Head of the Departments of English and Economics respectively. Abul Kalam Manzor Morshed joined as a Senior Lecturer in Bangla. Professor Syed Ali Ahsan was the first full professor of Chittagong University.

All degree colleges located in Chittagong division were brought under jurisdiction of Chittagong University in 1967 amending the Chittagong University Ordinance. The first degree (pass) examinations under the university was held in 1968. The following departments were opened in Chittagong University from 1968-69 sessions: Political Science, Commerce, Mathematics, Statistics, Chemistry and Physics, Sociology and Fine Arts departments were introduced from 1970. Meanwhile, 3-year honours courses in Bangla, English, History and Economics were introduced from 1968-69 academic session. The faculty of Science was created in 1969, while the faculty of social sciences and commerce were launched in 1971.

Chittagong University regularly publishes some journals and research periodicals. These include the Chittagong University Studies a research publication centrally published by the university; Pandulipi published by the Department of Bangla and Eco by the Department of Economics. The central library of the university has over 300 thousand books, 3500 journals and Internet facilities. The Chittagog University Museum set up beside the library has been playing a leading role in preserving the archaeological objects discovered in this region.

Students of the University regularly participate in various creative activities, cultural competition, sports, debate competition, bncc and Rover Scouts program beside the academic activities. In 2010, Chittagong University had nine residential halls for the students, one hostel and residential quarters for teachers and staffs. It had 18,781 students, 648 teachers and 1947 supporting staffs and officers.