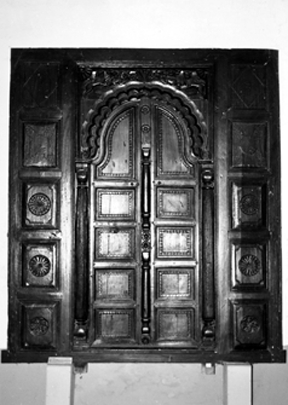 Much of woodworks have been lost due to natural calamities, poor maintenance and different political upheavals; nevertheless quite a few 11th and 12th century woodworks could be gathered from Rampal of Munshiganj district and these are preserved in the Bangladesh National Museum (BNM). Two 11th/12th century pillars are exquisitely decorated.

There was not even the slightest deficiency in designing wooden materials with images, flowers, creepers and herbs. It is quite clear that the woodworks were polished like stonework. The door-frame engraved with Visnu in meditative posture and found from Sonarang under Tangibari of Munshiganj district is an important illustration of Bengal woodworks. Much of its elegance was lost for having been immersed in water for a long time. The image of Lokanath, also found from Tangibari, is another memento of woodwork worth mentioning.

The sculpture of Surasundari (divine nymph) engraved on wood, found while a pond was being excavated in the village of Kazikasba, is another delicate relic of woodwork. The betel-leaf-faced Surasundari, standing with a parrot in her hands, has large eyes, sharp nose and smiling lips. She, through a masterly treatment, was given heavenly beauty. Scholars place the wooden image of Tirthankara, found from Faridpur and now preserved in the asutosh museum, Calcutta, to the 10th-11th century.

dinesh chandra sen, in his Brhatvanga, has mentioned about the decorated woodworks in a temple (c 14th century) of Satkhira district. Decorated woodworks have also been found from the district of Malda and scholars place them to the 16th century. All these lead one to the conclusion that Bengal has a long heritage of woodworks and the tradition continues till today.

But during the period from the 17th to the 19th century new motif of art was added to the age-old Bengal tradition. Foreign traders brought with them their own system of woodwork and since then there was intermingling of exotic trend with the local one and a mixed system of art was the consequent result.

Imitating the European way of life, Bengalis began to furnish their drawing rooms, bedrooms and dinning rooms in the European style. The trend did not remain confined merely to the rich and the zamindar class but its effect could be noticed even among the people belonging to the middle class and even lower middle class of Bengal as well of India as a whole. People began to have their houses furnished in the new model. But in rural Bengal the traditional trend was continued. The carpenters of rural Bengal sometimes got an admixture of the European style with the age-old local variety of woodworks and sometimes clung to their own style in designing divergent materials eg partition walls, chests, bedsteads, husking pedals, panels etc. 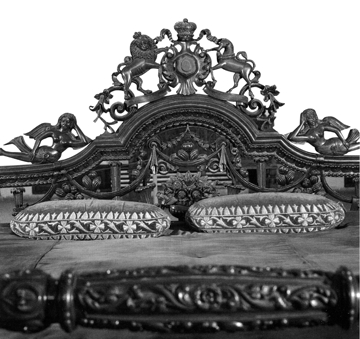 In the local variety of ornamentation, motifs of beasts and birds, the daily life of an individual as well as of the corporate society, wild flowers, kalmilatas (edible aquatic plants) and local deities found expression. Images of different gods and goddesses as depicted in religious scriptures were also engraved. Images depicting Radha-Krsna, Krsna stealing the wears of cowherd-girls, Krsna tending cowherd, Gaur-Netai, durga etc were very often engraved.

Generally partition walls, doors, panels, temple walls, pillars, bedsteads, chairs, tables, chests, beauty boxes, palanquins, chaityas, chariots etc were decorated in the mixed pattern of indigenous and European styles. In designing the woodworks the carpenter undoubtedly played the most important role, nevertheless sometimes the role of the head of the family got the upper hand. Thus woodworks in Bangladesh was an evolutionary development with the intermingling of local and foreign elements. After 1947 woodwork in Bangladesh got a set back when woodworkers left the country en masse.

Subsequently the local carpenters tried to give the art a new lease of life but they did not succeed much due to socio-economic conditions. Though a marked development is noticed in the art at present, but high skilled products are few and far between.

The variety in woodworks prevalent during the period from the 17th century to the 19th century is not noticed any more. Now in respect of designs and patterns of ornamentation new outlook is getting predominance in decorative woodworks. In earlier times, imitating the Victorian furniture, an elephant’s paw or the claws of a lion or an eagle found expression. Fairies, peacocks, lions’ jaw, lions, horses etc were engraved on different furniture like bedsteads, chairs, tables, selves, almirahs etc. At present modern designs are applied in all sorts of furniture. Boxdivans have replaced traditional bedsteads. The repose of the divan or their stands necessary for suspending mosquito nets are no longer decorated. In rural areas pedestals, stands, reposes of the bedsteads etc are decorated in the traditional manner but the perfection in execution is hardly seen.

In recent times decorated doors and door-frames are getting prevalence among the richer section of the people. Now machine drawn designs are getting preference in engraving furniture. At present traditional furniture also are being used side by side the modern ones. The moneyed class are patronising the traditional woodworks.

Woodworks are also practised in musical instruments, dolls, utensils, house decorative materials, sculpture, boats, and upper portion of the front of a truck. Woods may generally be decorated in four ways: carving, engraving, inlay, and ges painting. Of these engraving is the most popular form. Inlay was popular in the 18th and 19th centuries. Ivory in delicate form was used in inlay. In some cases metallic slices were used in the case of inlay. At present inlay of metallic wire is being reintroduced on wood. A carpenter makes different designs on wood using the two systems of carving and engraving. These designs are made attractive through dazzling colours. [Zinat Mahrukh Banu]