Bagakain Lake popularly known as Baga Lake is a natural lake in the hill district of bandarban. It is located on one of the peaks of the Politai Mountain Range in Naitong mauza of ruma upazila, about 29 km east of the banks of the river Shankha. The lake is rectangular. It is bounded on three sides by mountain peaks covered with thick bamboo bushes. The lake is a plateau of height between 457 and 610m above the sea level and 38m deep. It is a closed lake and there is a small spring named Bagachhara, which is 153m deep. There is no outlet for draining out water from the lake. The lake is composed of the soft rocks of the bhuban formation. The main source of water is the spring. However, there are also other sources such as rainfall, surface drainage and spring seepage. The water of the lake is used by the local tribal people as drinking water but sometimes it changes colour and looks turbid. It is suspected that there is a hot spring at the bottom of the lake and the colour of the lake';s water changes due to the discharges of that hot spring. Geologists believe that the lake is either the crater of an inactive mud volcano or it was originated due to falling of meteorites from the outer space. Some also argue in favour of a big landslide. 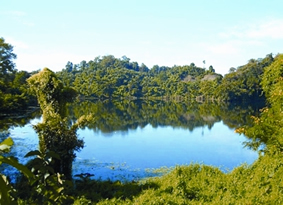 The water of the lake is highly acidic, so no weed or plant can grow there. Neither can any fish live in it. The lake attracts tourists because of its scenic beauty but it is inaccessible by any means of transport. Only those who take the trouble of walking through the hilly bushes sometimes visit the lake. Aboriginal people living around the place believe that Baga Lake and its surroundings are the abodes of goddesses, to whom they pray for good harvests in jhum cultivation. A local legend goes that Baga Lake was created after the inhabitants of a Khumi village killed and ate a deity who later reappeared to them in the form of a dragon. Instantly an earthquake occurred, the hillside caved in, and the village disappeared and formed a deep lake. [S M Mahfuzur Rahman and Sifatul Quader Chowdhury]