Administration Bagha Thana was turned into an upazila on 26 March 1983. 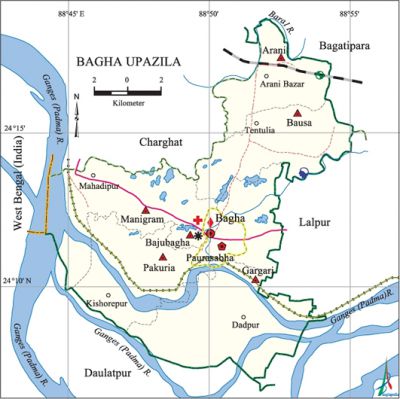 Historical events Alaipur village of Bagha was the headquarters of Laskar Khan Jaigirdar during the sixteenth century. Hazrat Shah Doulah settled at Bagha and started preaching Islam. He also established a famous madrasa here. During the war of liberation in 1971 the Pak army established temporary camps at different places like Arani, Bagha, Narayanpur, Pakuria, Chawkrajapur and Alaipur. A number of encounters between the freedom fighters and the Pak army occurred in those places. The heroic resistance of the freedom fighters of this upazila compelled the Pak army to flee at different places like Pabna, Arani, Natore and Nandangachhi; while the people of those villages killed many of them. About 400 freedom fighters participated in the War of Liberation from Bagha Upazila of whom 7 lost their lives.

Hats, bazars and fairs Hats and bazars are 26, fairs 2, most noted of which are Bagha, Mirganj, Chandipur, Narayanpur, Arani, Manigram, Rustampur hats and Bagha Eid Mela.

Natural Disaster' In 2009 4 km area of land and 677.26 hectors of agricultural land were submerged in the Padma river bed due to erosion.