Baliakandi Upazila (rajbari district) area 242.53 sq km, located in between 23°33' and 23°44' north latitudes and in between 90°26' and 90°40' east longitudes. It is bounded by pangsha upazila on the north, madhukhali upazila on the south, rajbari sadar upazila on the east, Pangsha and sreepur upazilas on the west.

Administration Baliakandi Thana was formed in 1881 and it was turned into an upazila in 1983. 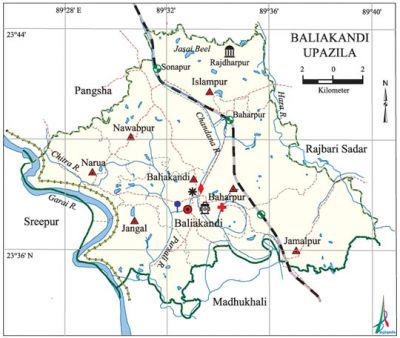 Historical events Baliakandi was an important outpost of the fakir-sannyasi resistance movement. The peasants of village Sonapur of this upazila led the indigo resistance movement. During the war of liberation an encounter between the freedom fighters and the rajakar-police forces were held in November at Baliakandi. In this encounter the freedom fighters captured all arms and ammunitions of the enemy fotces and compelled them to surrender.

Hats, bazars and fairs Hats and bazars are 6, fairs 5; most noted of which are Baharpur, Jamalpur, Sonapur, Baliakandi hats and Mela of Hari Thakur and Beruli Mela.