Bandarban District (chittagong division) area 4479.03 sq km, located in between 21°11' and 22°22' north latitudes and in between 92°04' and 92°41' east longitudes. It is bounded by rangamati district on the north, Arakan (Myanmar) on the south, Chin Province (Myanmar) and Rangamati district on the east, chittagong and cox's bazar district on the west. Marmiana Tang, Bathil Tang, Kewkradang, Langfi Tang, Lakpang Tang, Thaingkiang Tang, Moudak Tang, Murangiang Tang, Rungrang Tang, Naprai Tang, Murifa Tang, Busi Tang, and Sara Tang are the notable hills of this district.'

Administration Bandarban district was formed on 1 October 1981. It is the 3rd largest of the 11 districts of Chittagong division. Of the 7 upazilas of the district thanchi is the largest (1020.82 sq km) and rowangchhari is the smallest (442.89 sq km) in size. 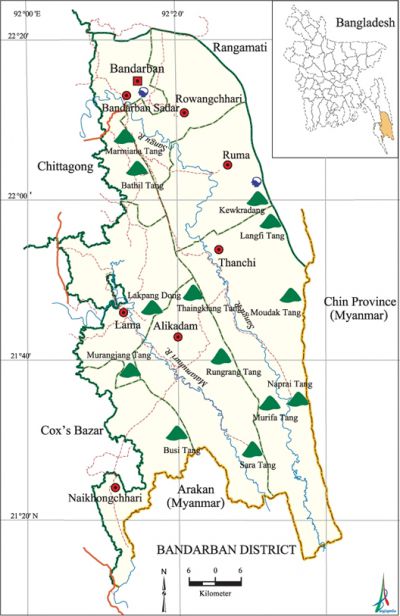 History of the War of Liberation During the war of liberation the Pak army conducted mass killing, torture and plundering; they also set many houses of the upazila on fire. The freedom fighters had temporary camps at Tumukra Para and at Sonaichhari Jhumkhola Para of Naikkhongchhari upazila.