Bawm, The a small tribe in chittagong hill tracts. Ethnically, Bawms belong to the Mongolian stock. They look like the chakmas and the marmas. The word Bawm means ties. The concept of such ties has developed from their culture of doing collectively all things of life, including hunting, singing and dancing, eating and drinking or offering homage to gods. Bawms live in 70 villages of ruma, thanchi, rwoangcchari and bandarban Sadar upazila of Bandarban district. According to the census of 1991, there are 1,349 Bawm families in Bangladesh with a total population 6,978. Bawms are very gentle in nature. They have their own social structure to regulate their conduct and settle disputes. They do not go to court or to any government agency to settle disputes. They regulate their life according to their own customary laws. 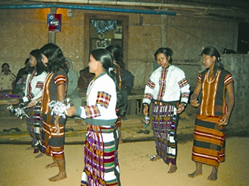 Bawms have little interaction with Bangalis. The Marmas and Arakanese of the Bandarban district call the Bawms Langi or Langay. The main occupation of the Bawms is jhum cultivation on the slopes of hills. They grow paddy, papaya, banana, vegetables and some other crops. Bawms love to live in dense forests and rarely come to the plains. The scarcity of land for jhum cultivation and gradual deforestation have affected the lifestyle of the Bawms to a great extent. Many Bawm children now attend schools. Christian missionaries have been propagating christianity among the Bawms since the middle of the 19th century. Almost all Bawms have now become Christians.

In the past, the Bawms would build their houses on hilltops away from the rivers. They used to fortify their villages with fences of tree trunks. Their houses are called machang and are made of bamboo and timber and erected on a high platform. Bawm society is patriarchal. A significant element in Bawm culture is the bamboo dance. It is performed only when there is a tragedy in the family, especially in the case of an unnatural death. Through this dance Bawms console their families. [Sadat Ullah Khan]