Administration Bhandaria Thana was formed in 1912 and it was turned into an upazila on 15th April 1983. 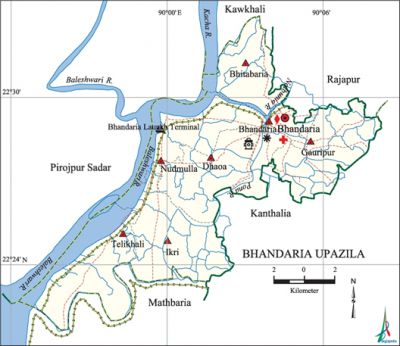 Historical events Peasant rebellion was held in 1854 at Singkhali of this upazila. Peasant leaders Gagan and Mohan Miah revolted against the British rule and the local zamindars in which 17 rebels were killed. The freedom fighters attacked the Bhandaria police station in August 1971 under Subedar Aziz Shikder in which a number of rajakars were killed. The Pak army retreated from Bhandaria upazila after they sacked the Bhandaria Bandar on 29 November.

Marks of the War of Liberation Memorial monument 1 (Shargabani).

Hats, bazars and fairs Hats and bazars are 18, fairs 4, most noted of which are Bhandaria and Ikri bazars and Dashhara, Baishakhi and Patlakhali melas.

Natural disasters As a coastal region this upazila was affected by tidal bore and cyclone for many times. Besides, the cyclones of 1941, 1961, 1970, 1977, 1986, 1988 and 1998 caused huge loss of life and damage to settlements, crops, livestock and other properties of the upazila.