Bochaganj Upazila (dinajpur district) area 224.81 sq km, located in between 25°40' and 25°54' north latitudes and in between 88°23' and 88°32' east longitudes. It is bounded by birganj and pirganj (rangpur) upazilas on the north, biral upazila and west bengal of India on the south, Birganj, kaharole and Biral upazilas on the east, Pirganj (Rangpur) upazila on the west.

Administration Bochaganj Thana was formed in 1915 and it was turned into an upazila in 1984. ' 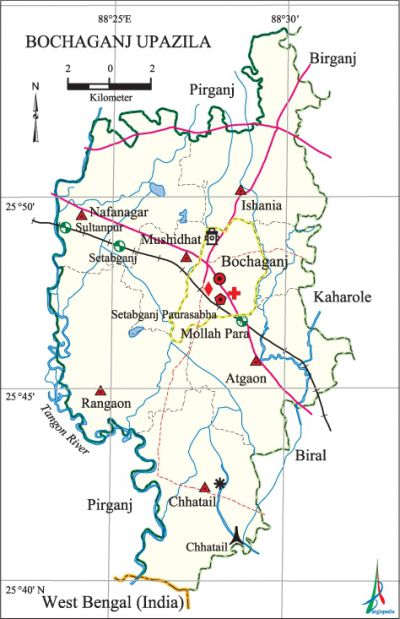 History of the War of Liberation During the war of liberation in 1971 an encounter was held between the freedom fighters and the Pakistan army at Maherpur hat. The Pak army burnt and sacked a number of nearby villages. Besides, 6 Pak soldiers were killed in a mine explosion by the freedom fighters at Pulerhat of the upazila.

Hats, bazars and fairs Hats and bazars are 28, fairs 1; Bochaganj Hat and Setabganj Mela are notable.