Boda Upazila (panchagarh district) area 349.47 sq km, located in between 26°05' and 26°23' north latitudes and in between 88°27' and 88°46' east longitudes. It is bounded by panchagarh sadar upazila on the north, thakurgaon sadar and debiganj upazilas on the south, Debiganj upazila on the east, atwari, Thakurgaon and Panchagarh Sadar upazilas on the west. Indian enclaves such as Nagirganj, Shalbari, Meyelia, Doikhata, and Maidandighi belong to this upazila.

Administration Boda Thana, now an upazila formed in 1883. After the partition of India in 1947 this upazila was included into Thakurgaon Sub Division of Dinajpur district and in 1984 it was included into Panchagarh district. 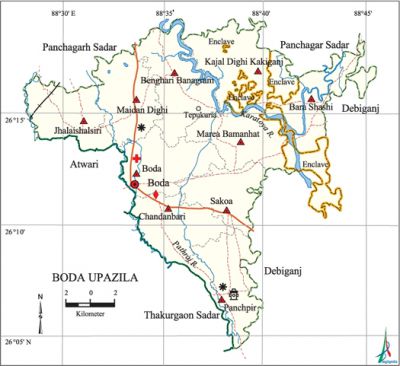 Historical events The people of this upazila actively participated in peasant movement against Devi Singh (end of 18th century), fakir-sannyasi resistance (1763-1800), sepoy revolt (1857), tebhaga movement (1938-1947), peasant movements (1958-68) and mass upsurge of 1969. A number of guerrilla attacks were held in this upazila during the nine month war of liberation. The Pak army in collaboration with the rajakars conducted heavy torture in the upazila. The Pak army captured Boda town on 18 April 1971. Boda was liberated on 1 December 1971.