Administration Chandanaish Thana was formed in 1976 and it was turned into an upazila on 2 July 1983. 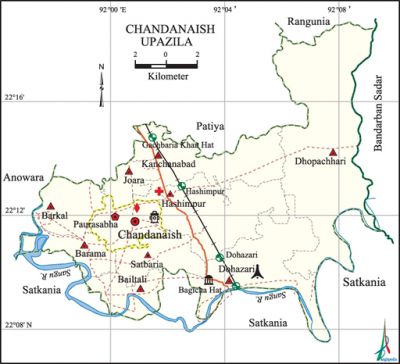 Historical events The Mughal army conquered chittagong in 1666; later, the Mughal army crossed the karnafuli river and established their position at the northern bank of the Sangu River under Murtaza Khan. Adhu Khan and Lakshman Singh, two hazari mansabdars were deputed to defend the border of that area. It is assumed that Dohazari was named after these two hazari mansabdars. Later on, two forts were built there. The British built an air base at Dohazari. Towards the end of the war of liberation, fierce battle took place between the Pakistan army and the freedom fighters in which the Pakistan army was defeated. During the Liberation War the swadhin bangla betar kendra was transferred to Dohazari from Chittagong town.