Satkania Upazila (chittagong district) area 280.99 sq km, located in between 22°01' and 22°13' north latitudes and in between 91°57' and 92°10' east longitudes. It is bounded by chandanaish upazila on the north, lohagara (Chittagong) upazila on the south, bandarban sadar upazila on the east, banshkhali and anowara upazilas on the west.

Administration Satkania Thana was formed in 1917 and it was turned into an upazila in 1983. 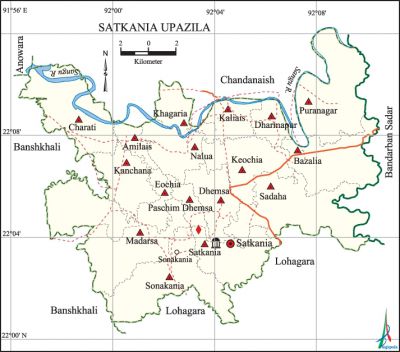 History of the War of Liberation On 8 August 1971 the Pak army captured 17 innocent people from Satkania Bazar and Swatipara and killed all of them. During the war of liberation the Pakistan army launched plundering at Baniapara (south Satkania) and set on fire a number of houses. Afterwards they killed twenty four innocent people.

Natural disasters The cyclones of 1976 and 1991 caused heavy damages to settlements, livestock, crops, forestry and other properties of the upazila.