Administration Charghat Thana was formed in 1919 and it was turned into an upazila in 1983. 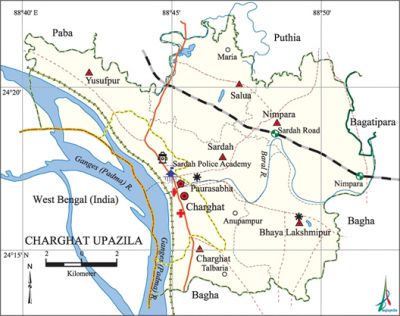 History of the War of Liberation The early resistance movement against the Pak army started from Sardah Police Academy and Rajshahi Cadet College. A number of freedom fighters including Professor AB Siddiqi of Cadet College were killed on 13 April in resistance encounter with the Pak army at a place near the Belpukur Bridge (Putia). On the same day, Mojer Ali (member of the Ansar Force) of Charghat upazila was killed in resistance encounter with the Pak army at Nagarbari. The Pak army, on their way to Charghar, killed Nader Chairman at Baneshwar; they also killed Rais Uddin (a member of Ansar Force) at Sardah Bazar. The Pak army advanced towards the bank of the river Padma and killed by brush fire a few hundred of innocent people who were waiting to cross over to India; the Pak army even burnt the Charghat Bazar. The Pak army used to torture women and freedom fighters at their temporary camps at different places such as Police Training Centre, Cadet College, Sardah Pilot School and Brick field of Roy Saheb.

Marks of the War of Liberation Mass grave 2 (Brick field of Roy Saheb and north west corner of C & B brick field on the north side of village Ladara); Mass killing site 1, Sculpture of the war of liberation 1 (Police Academy, Sardah).

Sources of drinking water Tube-well 97.43%, pond 0.04%, tap 0.72% and others 2.11%. The presence of intolerable level of arsenic has been detected in shallow tube-well water of this upazila.