Chauhali Upazila (sirajganj district) area 243.67 sq km, located in between 24°01' and 24°17' north latitudes and in between 89°41' and 89°59' east longitudes. It is bounded by belkuchi upazila on the north, bera and daulatpur (manikganj) upazilas on the south, tangail sadar and nagarpur upazilas on the east, Shahjadpur' and Bera' upazilas on the west.

Administration Chauhali Thana was turned into an upazila in 1984. 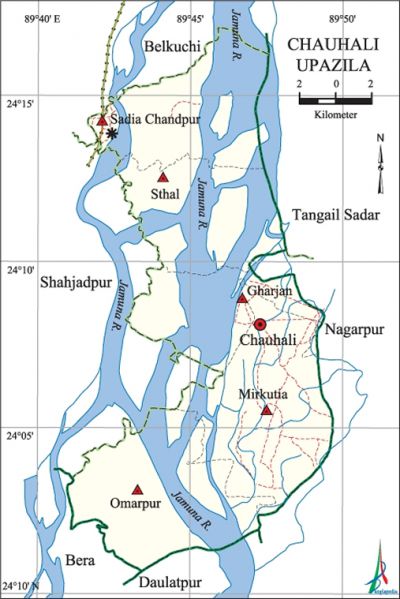 History of the War of Liberation During the war of liberation in 1971 the Pak army, in collaboration with the local rajakars, conducted heavy plundering and set many houses on fire after establishing military camps at Malipara on 22 June and at Sambhudia in the mid August. The freedom fighters attacked the Sambhudia Pak military camp on 19 November and captured two fire arms. On 27 November, the freedom fighters again attacked the Sambhudia camp causing considerable damages to the camp; in this attack 5 freedom fighters were wounded. Chauhali upazila was liberated on 29 November.

Hats, bazars and fairs Hats and bazars are 14, fairs 5 most, noted of which are Enayetpur and Jotpara Hat.

Natural disasters The flood of 1988 caused heavy damages to settlements, livestock and crops of the upazila. Besides, 30 persons died of small pox in 1967.