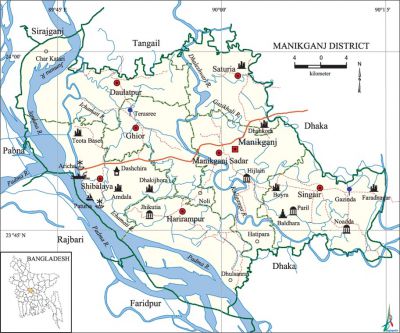 Water bodies Main rivers: padma, jamuna, dhaleshwari, ichamati, Kaliganga, Gazikhali. Administration Manikganj Sub-division was established in 1845 and it was turned into a district in 1984. Of the seven upazilas of the district harirampur is the largest (245.42 sq km) and saturia is the smallest (140.12 sq km).

Marks of the War of Liberation Mass grave 1 (beside the Thana pond); mass killing site 4 (Saturia Pilot High School compound, Primary Training Institute Campus, Tara Ghat, residence of Balai Babu); memorial monument 2 (at village Terasree, at a place on the western side of the Manikganj Bus-stand).