Chuadanga District (khulna division) area 1177.40 sq km, located in between 23°22' and 23°50' north latitudes and in between 88°39' and 89°00' east longitudes. It is bounded by kushtia and meherpur districts on the north, jhenaidah district on the south and east, Meherpur district and west bengal state of India on the west. 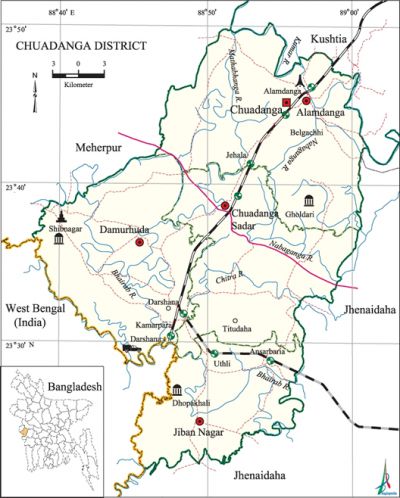 Historical events From the beginning of the British rule the people of Chuadanga participated in many uprisings and democratic movements. Their contributions to uprisings and movements including the wahabi movement (1831), faraizi movement (1838-47), sepoy revolt (1857), Indigo Rebellion (1859-60), swadeshi movement (1906), khilafat movement (1920), non cooperation movement, Violation of Law and Satyagraha Movements (1920-40), Quit India Movement or August Revolt (1942), peasant movements and Freedom Movement are notable. During the war of liberation in 1971 early resistance was put up in Chuadanga. During the War of Liberation more than one hundred direct encounters were held between the Pak army and the freedom fighters in Chuadanga district. In 1971 a number of razakars and Pak soilders were killed or wounded in frontal encounters with the freedom fighters at Baliapur and Benagari villages. Ten Pak soldiers were killed at Shialmari in between Jiban Nagar and Darshana by mine explosion planted by the freedom fighters. Besides, 5 freedom fighters were killed and 2 were wounded in an encounter with the Pak army on the Dhopakhali border. The Pak army brutally killed many people and set many houses on fire at village Madna of Damurhuda upazila. During the War of Liberation in 1971 the present Chuadanga Sadar Hospital was the headquarters of the Pak army. The Pak army brutally killed about 300 innocent persons at the backyard of the Hhspital (present Shantipara). Besides, the Pak army destroyed part of a bridge on the river Mathabhanga while they retreated from Chuadanga.

Marks of the War of Liberation Mass killing site 1 (a spot behind the Chuadanga Sadar Hospital); mass grave 3 (places on the back of the Natudaha High School, at village Dhopakhali near the Jiban Nagar border and on the bank of G.K Canal near Alamdanga Railway Station); memorial monument 3.