Administration At the beginning of the British rule Jhenaidah was a police out post and was turned into a thana in 1793. The Jhenaidah Sub division was established in 1862 and was turned into a district in 1984. Of the 10 districts of Khulna Division Jhenaidah district occupies the 5th position and it occupies the 34th position among the 64 districts of Bangladesh. Of the six upazilas of the district jhenaidah sadar is the largest (467.75 sq km, it occupies 23.99% of the total area of the district) and kotchandpur is the smallest (165.66 sq km). 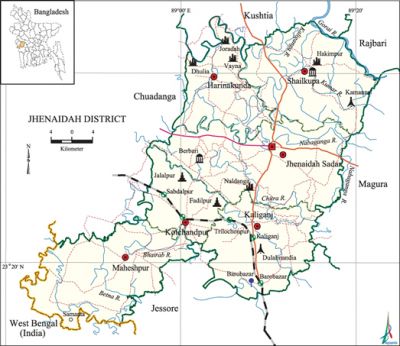