Administration Dhupchanchia Thana was formed in 1880 and it was turned into an' upazila in 1983. Dhupchanchia Municipality was established in 2000. 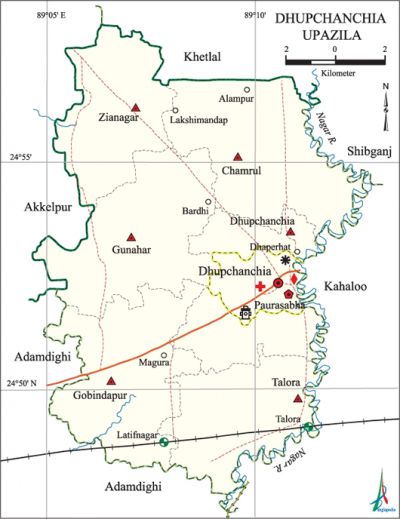 History of the War of Liberation The Pak army entered into this upazila on 10 April 1971 for the first time. On 11 April they killed one person in front of the Union Parishad office; they also killed 9 persons at the house of Zamindar Khitish Chandra Chowdhury. In early August the freedom fighters of this upazila destroyed the Bara Chapra Railway bridge, and in the last' part of August they destroyed the Kahalu bridge on the Akkelpur Roykali Road of Zianagar. Besides, the freedom fighters killed two EPR personnel in front of the Union Parishad office.

Marks of the War of Liberation Mass grave 1 (at a place called Padmapukur by the side of the Talora Dhupchanchia Road.

Natural disasters The cyclone of April of 2004 caused heavy damages to nearly 200 houses and crops of villages Dhap Sultanganj, Kholash, Mostafapur and Nemaikola of the upazila.