Durgapur Upazila (RAJSHAHI DISTRICT) area 195.03 sq km, located in between 24°23' and 24°32' north latitudes and in between 88°40' and 88°52' east longitudes. It is bounded by baghmara and mohanpur upazilas on the north, puthia upazila on the south and east, paba upazila on the west.

Administration Durgapur Thana was formed in 1909 and it was turned into an' upazila in 1984. 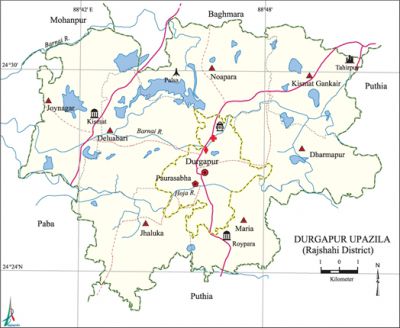 History of the War of Liberation In 1971 a battle was fought between the freedom fighters and the Pak army at Kabasmul (boarder of Paba-Durgapur) in which a Pak army Major was killed; in retaliation the Pak army killed 44 innocent villagers of Gaganbaria and Palsa.

Marks of War of Liberation Mass killing and memorial statue at the playground of Palsa School.