Administration Paba Thana was formed in 1949 and it was turned into an upazila on 11 November 1983. 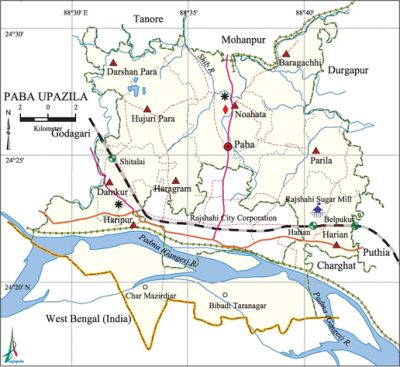 Historical events Hindu Muslim riot was held at village Hujuri Para Sarusa in 1962 consequent upon the Hindu Muslim riot in India. After the partition of India many Muslim families from Maldah and Murshidabad established their settlements in this upazila by exchange of land. In the region they are known as 'land exchange refugee'. During the war of liberation the Pak army forced 27 youths to dig ditch and at village Sonaikandhi in Haripur union and on completion of digging the ditch the youths were shot dead and buried in the ditch. The Pak army made a surprise attack on the Police camp of Bolanpur and killed all the police personnel and buried them at a brickfield. The freedom fighters destroyed a patrol vehicle of the Pak army by ambush on the Rajshahi-Nawabganj road near Kasba Sugarcane Purchase Centre and killed 10 to 12 members of the Pak army. Besides, the Pak army established a camp at Godagari Hat of this upazila and launched inhuman torture in the nearby villages.

Marks of the War of Liberation Mass grave 1 at Sonaikandi; mass killing site 1 (near the Joha Hall of Rajshahi University); memorial monument at the playground of Noahata College.