Elephant (hati) common name for two living species of mammals of the family Elephantidae. One of the species Loxodonta africana is indigenous to Africa, and the other Elephas maximus ranges through Bangladesh, India, Sri Lanka, Nepal, Bhutan to Southeast Asia. Although once elephants were found in the forests of Sylhet and Madhupur, now in Bangladesh they are available only in certain areas of Chittagong and chittagong hill tracts. Occasionally wild elephants from Indian territory enter in Balijpur and Durgapur areas of Mymensingh, and Patharika areas of Sylhet. Elephants are largest among the terrestrial animals and entirely hervivorous. They attain a height of about 2.5 metres. 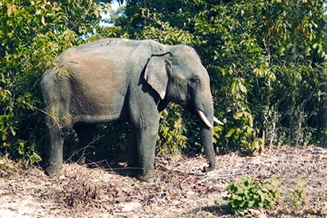 The nostril and upper lip are elongated into a proboscis, the trunk, which is a powerful and sensitive organ has become specialized to form a prehensile, food gathering structure. Ears are large, triangular; skin thick loose, sparsely covered with hair. Legs are pillar-like. The upper incisors in male protrude from the mouth on either side of the trunk as tusks.

The eyes are tiny but vision is keen. Tail comparatively short with tassel of bristles. Elephants live and travel in herds composed of 5-20 animals with a mature bull, a number of cows and calves, and some younger bulls. They are at ease in water, and bathe and roll in the mud. Bulls reach sexual maturity at the age of 15, while cows mature earlier. The gestation period extends 20-22 months with a single calf being born. Twins are rare. The newborn, which may be 0.9 metre tall and weigh about 90 kg grows rapidly. Elephant’s longevity is about 60-70 years.

Elephants feed on grasses, banana plants, bamboo, tree barks, leaves, fruits and flowers. It is estimated that there are about 200 wild and 100 captive elephants in Bangladesh. Hindus revere elephant as an embodiment of Ganesh, the elephant-headed god of good fortune.

The tusks of elephants have long been used in ivory arts. It is said that the use of ivory in crafts began long before Christian era, and in India dates back to the Indus Valley civilization (2300-1750 BC). In Bangladesh the first evidence (11th century) of ivory crafts has been found in Sylhet, where expert ivory craftsmen used to be engaged by the ruler in making legs of thrones, furniture and temple decoration. [SM Humayun Kabir]