Fakirhat Upazila (bagerhat district) area 160.68 sq km, located in between 22°39' and 22°49' north latitudes and in between 89°34' and 89°47' east longitudes. It is bounded by rupsa and mollahat upazilas on the north, rampal upazila on the south, bagerhat sadar and chitalmari upazilas on the east, batiaghata and Rupsa upazilas on the west.

Administration Fakirhat Thana was formed on 7 June 1869 and it was turned into an upazila on 1 August 1983. 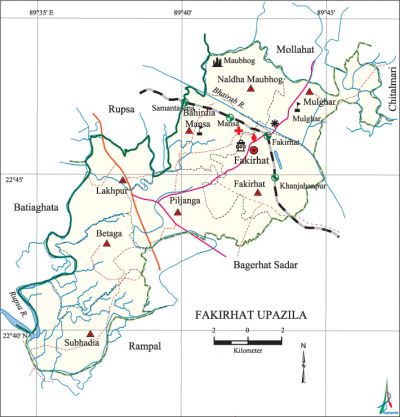 History of the War of Liberation During the war of liberation, the Razakars made a surprise attack on the camp of the freedom fighters at village Deyapara of Subhadia union in which many people from both sides were killed and wounded. On 6 May the Razakars of the upazila set many shops of Singati and Bahirdia bazars on fire. The Pak army, in collaboration with the local Razakars, brutally killed 9 innocent persons at Mansa of Bahirdia Mansa union on 25 August 1971.

Hats, bazars and fairs Hats and bazars are 9, fairs 6, most noted of which are Fakirhat, Lakhpur Hat, Betaga Bazar and Atraka Baishakhi Mela are notable.