Farming, Mixed a system of farming where crops, livestock, poultry, fish etc are raised in a farm. In other words, mixed farming utilizes cropping patterns which involve the raising of crops, animals, and or trees. A labour intensive mixed farming practice includes crops, duck, fish etc. on small-holdings, based on maximum recycling principles. Most mixed farms have more than one enterprise and may have production systems such as crop-cattle-goat-poultry-fish, crop-cattle-buffalo-poultry, cattle-goat-poultry, crop-fish, etc.

The cropping system is a subsystem comprising one or more crops, and all components required for production, including interactions among the crops, other household enterprises, and the physical, biological and socio-economic environments. 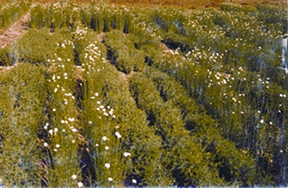 The cropping pattern is the special and temporal combination of crops on a plot and the management used to produce them. Bangladesh agriculture is complex, labour-intensive, and has a low technological and resource base. Moreover, agroecological conditions are complex in most parts of Bangladesh. There are several distinct land types in the country. Even in a village, at least three major land types exist. These land types determine different cropping patterns and make land use very complicated. Most farmers follow cropping patterns that involve sequential cropping, mixed-cropping, and relay cropping. Mixed cropping involves the simultaneous growing of two or more crops intermingled on the same land. There are two types of mixed cropping: 1. mixed inter-cropping, where two or more crops are grown simultaneously intermingled in the same land with no distinct row arrangement; and 2. mixed-row cropping where two or more crops are grown simultaneously in the same land intermingled within distinct row arrangements.

The advantages in mixed cropping are: (a) greater stability of yield over different seasons; (b) better use of growth resources; (c) better control of weeds, pests, and diseases; (d) one crop may provide physical support to another one; (e) one crop provides shelter to the other crop; (f) erosion control through providing continuous leaf cover over the ground surface; and (g) benefit to small farmers of limited means.

jhum cultivation in the Hill Tracts is a typical example of mixed cropping. Cropping systems research using a systematic approach, with the farmers as active participants, were initiated in 1974 by the Bangladesh Rice Research Institute. In 1980, a National Coordinated Cropping Systems Programme was organised and coordinated by the bangladesh agricultural research council (BARC) with the participation of institutes dealing with agricultural research. Recently, BARC has initiated a National Coordinated Farming Systems Research Programme to design appropriate cropping patterns for different areas of the country. Creeper vegetables can be grown as mixed cropping over most areas of the country. Integrated rice-cum-fish culture in low-lying areas and fish-cum-layer chicken culture, and fish-cum-broiler chicken culture can be practiced in different areas of the country utilizing perennial water bodies.