Fisherman The fisheries sector plays an important role in food consumption, nutrition, employment and export. The sector contributes more than 5% of Bangladesh's GDP and it creates job opportunities of 1.4 million people. According to the statistics of the FY of 2006-7, this sector earns 4.9% of the total foreign currency to export their commodities. 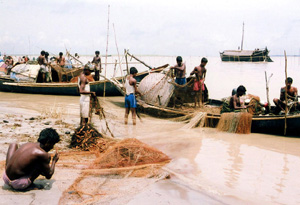 From time immemorial, a large number of Bengali people have depended for their livelihood on fishing and related occupations. Fishermen in rural Bangladesh usually live a community life in neighbourhoods or villages around the water bodies. They cooperate closely with one another not only in fishing, or in the cooperative utilisation of fishing grounds, but also in economic activities, such as marketing and purchasing, and in social life and family affairs. They have lived communally for many generations, creating in the process their own history, distinct traditions, and patterns of daily life.

Traditionally, fishermen have been Hindus. After analysing the report on the census of 1872, ww hunter had concluded that Muslims clung closer to the land and did not follow any trade in sowing or harvesting seasons to supplement their income. But like Hindus, they worked as fishermen, boatmen, or house builders during seasons when their labour in the field was not required. For Hindus, fishing has a traditional link with the caste system and is hereditary. Hindu fishermen believe their occupation to be sacred, although in the cast hierarchy, the fishermen are ranked the lowest of all occupational groups. But fishing is hardly a hereditary or a sacred occupation to Muslims and occupational mobility among them remains open for everybody. Nevertheless, fishermen from both religious communities share some common features. For example, they are all closely bound up with water bodies and their nature of work provides a feeling of belonging to their community and their subculture.

People who pursue fishing or related occupations can be grouped into different social categories. Hindu fishermen are formed into separate and distinct castes. One researcher classified the Hindu fishermen in different parts of Eastern Bengal and Assam into 23 separate castes. These are the kaibartas, kewat, karita, tiwar or rajbangshi, das shikari, malo or jhalo, namasudras or chandals, berua, jiani, karal, pod, bind or bindu, bagdi, patni, nadial, mali, hari, gonrhi, banpar, gangota, murari, surahiya, and lohait. Muslims usually adhered to such fishing related activities as fish trading and carrying. They are also identified separately from other occupational groups. Muslims do not admit caste system but are grouped into distinct sects or functional classes with restrictions on eating and marrying, similar to the Hindu caste divisions. The principal sects among Muslims in Bangladesh who take up fishing or related occupations are known as mahefarosh or mahimals (Persian word mahi meaning fish and farosh as vendor), dalatya, nikari, gutia jelia, jiani, dhawa, abdal and bebajya.

Fishermen of Bangladesh depend on both fishing and crop cultivation for their living. However, most fishermen are primarily dependent on fishing. They use simple and traditional fishing equipment. For fishing in the inland waters the fishermen use non-motorised boats and traditional nets. The only touch of modern technology is the recent use of nylon nets. However, the sea going fishers generally use motorised boats and modern nets for fishing expeditions.

The practice of fishing may be an activity of an individual or a group of fishermen but fishing equipment is often owned by an individual and not by the group. Owners of fishing equipment use them by themselves or by taking working partners on the basis of share of the total fish caught. Generally, the working partners of a net-group are primarily selected from the kin-members. In cases where the kin-members are not available, neighbours, friends and community members are included in the group.

The income from fishing is different not only in accordance with the types of fishing practices but also with the variations in fishing seasons. The variations in seasons cause changes in the yields of fishing and income of the fishers. The income position among the fishers is differentially distributed which manifests how incorrect is any view that regards the fishers as on the same level, having neither the possibility nor the capacity of improving their position.

In marketing their daily catch, the fishers prefer spot trading and settlement of payments in cash. Fishers sell fish directly to the consumers or to the intermediary traders who are locally known as nikaris (wandering fish traders) and adatdars (warehouse-owners).

In the process of fish marketing, fishermen are interlocked with nikaris or adatdars by a system of dadan (interest-free credit) transactions, where the middlemen exploit fishermen by controlling and manipulating the prices of fish.

The business of fishing is combined with non-fishing economic pursuits like cultivation, wage-labour, net making and mat making. During slack seasons, as well as in their leisure times, men and women of the fishing community engage in non-fishing pursuits for some additional income.

Fishermen are very conscious of their cultural unity and distinctness. They have a strong regard for their institutions and a belief in the rightness of their values. In their social life they maintain a strong bond of kinship. It is their belief that kins are more dependable than others, while they are at work in the rivers. Hindu fishermen believe that God has entrusted them with the sacred duty of fishing to serve others with the supply of fish. So any sort of deviation from their jati-pesha (caste occupation) will be a sin for them. The religious beliefs of fishermen are supplemented by some particular types of rituals and ceremonies. Thus they propitiate the Ma Ganga (mother Ganges) not only for helping them make a good catch but also for keeping them safe while they are fishing. Muslim fishermen also perform some rituals for success in their pursuits. They say prayers, arrange milads (prayer to Allah praising the holy prophet's birth), take blessings from religious leaders by offering shirni (sweetmeats) as well as money to dargahs (a mausoleum of a holy saint) before setting out on the first fishing voyage of the season.

Fishermen also have their own folklore, history and literature. These are useful sources of information about their beliefs. In harmony with their natural environment, the fishermen of Bangladesh have developed songs and stories, sayings and folklore, jokes and riddles. During their day's work fishermen derive mental pleasure by singing folksongs such as bhatiyali and shari songs. These songs have vigorous rhythms and utilise folk dialects and themes taken from everyday life. These cultural elements of the community life of fishermen constitute them as distinct entities.

Fishermen in Bangladesh are usually ranked very low in the social hierarchy. JN Das Gupta, while illustrating the hierarchical divisions of various functional groups living in village communities of sixteenth century Bengal, has identified the fishermen as one of the most despised castes. Hunter and Risley ranked fishing community in the lowest position in the hierarchy of castes among Hindus. Among Muslims, mahifarosh, maimuls and the nikaris ie, the net workers and fishermen are also often regarded low in the social hierarchy. It is a cultural paradox that although fish is highly valued in Bangladesh, people who catch it are generally despised. However, due to the introduction of export-oriented fishing economy, the perceived status gap between fishermen and 'higher class' people has been reducing in recent years.

The community life of fishermen of Bangladesh has changed gradually. Due to the decrease in fishing grounds and fishery resources, members of the fishing communities have tended to leave their traditional occupation in search of other jobs. Moreover, they are subject to overwhelming and disruptive pressures and various attractions from within and outside. The high growth of population presses on inadequate and often deteriorating water resources; mass communications and the population movements stimulate new demands for consumer goods and social benefits; and introduction of export-oriented fisheries have created wider opportunities to produce for the market rather than for subsistence. The traditional subculture of the fishing community has tended to break down under these pressures, leading to declining integration and growing dependence on national institutions and the wider economy. [Md Anwar Hossain]