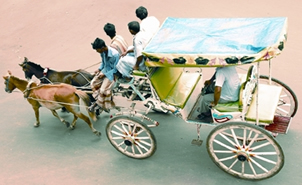 Folk Transport vehicles and vessels used on land and water by communities of people. Since ancient times elephants, horses, donkeys and buffaloes have been used in Bengal as land transport.

In ancient and medieval times elephants were used to transport men and materials on battlefields. Sometimes kings and emperors, as well as courtiers and noblemen, went for joy rides and tiger hunts on elephant-back.

People living in the jungle often used the elephant for their work, particularly for transporting logs. Moreover, during various festivals and ceremonies, the elephant played an important role. Nineteenth-century sketches of muharram show elephants leading the procession.

Bulls and buffaloes have long been used for pulling carts. Once farmers and herdsmen in rangpur and Cooch Bihar in West Bengal used to ride on water buffaloes. In some places herdsmen continue to do so. Bullock carts, pulled by buffaloes and bullocks, are still the chief means of transport for goods in rural areas. The horse was another common form of transport in the past used for carrying people and goods. Horse-drawn carriages were introduced in this country long ago and are still widely used in the northern parts of Bangladesh, especially in the rajshahi region. The horse-drawn carriage was one of the chief modes of transport of the aristocracy. It is still used in old dhaka during different festivals and ceremonies. 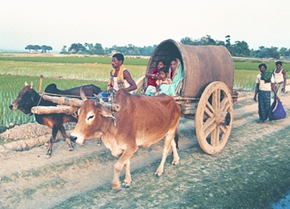 Dulis and palkis or palanquins were once widely used in rural areas. A duli, made of bamboo and rope, was carried by two bearers and usually accommodated a single passenger. A palki was bigger in size and made of wood. There were doors on both sides.

A long cylindrical pole was attached to it lengthways through the middle. A palki is carried by two or four men, known as beharas, who held the pole at both ends. In the past palkis were widely used by aristocratic families and during weddings in rural areas. Special songs known as ‘Palki Songs’ were also sung on these occasions. Due to the introduction of mechanised vehicles and the development of roads in rural areas, the use of dulis and palkis is now almost extinct.

The thelagadi, the pushcart, pulled by one man in front and pushed by another at the back, is still used in rural areas. Till the eighties, the pushcart wheel was wooden, but now most pushcarts have rubber tires. 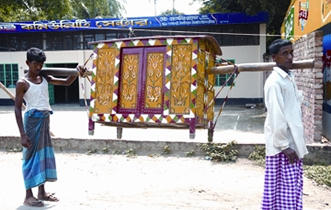 Boats are generally divided into three categories: bajra, kosa and dibga. A bajra is a large, slow-moving boat. It was a luxury boat, and, in the past, was usually used only by the rich. The longer, faster boats are known as kosa. In the past kosa, known as ranatari (war boats), were used for naval battles. All other small boats are called dinga.

During the rainy season, impoverished villagers also used rafts made of banana plants. manasamangal, for example, refers to the dead body of Laksindar being set adrift on a raft. In some regions hollowed-out trunks of palmyra trees are also used as a means of water transport.

Chariots were used in ancient India, but it is not known whether they were used in Bengal. However, chariots are still used on the occasion of rathayatra, during the worship of the god jagannath.

rickshaws, once a symbol of modern technology, are today a form of folk transport. Increasingly being accused of causing traffic jams in the cities, they are a colourful, environment-friendly mode of travel. Rickshaw-vans are a modernised version of the pushcart, and have become very popular in cities and small towns. Mainly used to carry goods, they are often used to transport people as well and can carry 6-8 persons. [Muhammad Abdul Jalil]