Fruit a structure formed from a mature or ripe ovary of any plant species after fertilization has occurred. The term 'fruit' is more conveniently used to refer to the part of the seed suitable for human consumption, eaten fresh, either ripe or young. From the nomadic age to present-day civilized life fruits have been used as food. The earliest cultivated fruit appears to be the date palm. Other fruits like pomegranates, Egypt figs and olives had been popular fruits since 3500 BC. Fruits have pericarps developed from ovary walls and seeds developed from fertilized ovules.

Generally the ovary alone grows into a fruit. But in some cases calyx and thalamus are involved to form false fruits like Dillenia, cashew nut and apple. Simple fruits developed from single ovary, is the character of fruits. Aggregate fruits are developed from numerous ovaries as in jackfruit and pineapple. 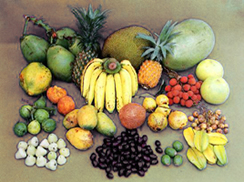 May, June and July are specially treated as fruit festival months in Bangladesh when almost all the major and minor fruits are matured and available. A few fruits are available throughout the year. These are the papaya, sapodilla, coconut and banana. The common imported fruits are orange, apple, pomegranate, grape, date, and mandarin.

In Bangladesh the cultivation of temperate fruits has been unsuccessful, except for grapes in some places. Oranges are cultivated only in a very limited areas in Sylhet and in remote areas of Rangamati (Sajeek) and Bandarban (Ruma) districts.

Fruit tree Trees that produce edible fruits for human consumption. Human civilization is irrevocably linked with the culture of food plants and fruit trees. The earliest selection and culture of fruit trees seems to be the date palm. The mango has been in cultivation for 6,000 years; it is one of the oldest tropical fruits indigenous to India. The commercial production of fruit trees started at the beginning of the 18th century. Traditionally the fruit trees were cultivated as a backyard crop or as boarder tree to fulfil the requirements of the family. In the beginning of the 19th century, the Christian missionaries and European settlers pioneered the organised culture of fruit orchards in the subcontinent. Since the beginning of the 20th century, a wide variety of major and minor fruit trees are being grown in Bangladesh on a commercial basis. Most of the major fruit trees are evergreen in nature of which mango, jackfruit and coconut occupy almost 90% of the fruit tree culture in Bangladesh. Mango, the most popular fruit tree in the country, has about 3000 varieties both in cultivation and in the wild. The most popular varieties grow in the northern districts of Bangladesh; fruit weight varies from 100-1000g; June-August is the time to harvest. Jackfruit, which originated in the Western Ghats of India and now grows all over the country, is another popular fruit. The large bushy evergreen tree produces composite fruits, perhaps one of the largest fruits (up to 50 kg) in the plant kingdom. June-September is the time to harvest.

Litchi was introduced in India from China in the beginning of the 19th century. A much branched evergreen tree grow well in almost all parts of Bangladesh. But the good quality fruits are grown in Dinajpur, Rajshahi, Jessore and Khulna regions. June and July are the months to harvest. Coconut grows abundantly in the southern and central parts; the average fruit number per plant is 70-80; can be harvested throughout the year. Green coconut is a favourite drink in summer; the endosperm of ripe fruit is mostly used in preparation of sweets. Guava, a semi-deciduous exotic plant from tropical America introduced in the middle of the 18th century, is grown in almost all village groves. About 50 varieties are found all over the country, most of which grow in Chittagong, Comilla, Sylhet and Barisal regions. Fruit weight varies from 20-700g; can be harvested during July-September. Indian Jujube (\\boroi, kul\\) is a small fruit-bearing medium-sized deciduous tree; fruits are available in off-seasons; the fruit weight is 10-70 g; can be harvested during February-March.

Table 1  Area and production of some important fruits produced in Bangladesh. 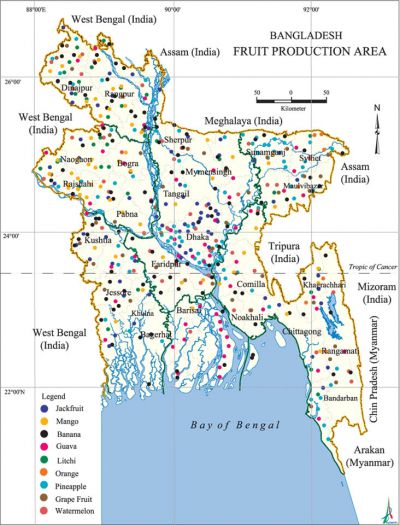 In recent years, fruit production has been increasing slowly in this country. Some fruits coming from foreign countries are also produced here recently. However, the supply of fruits is much less than the requirement. Each person should consume at least 85 grams of fruits per day for a healthy life. In that case, we consume only about 35 grams per day. The distribution of this is also unequal. The rich consume more, while many of the poor people do not get it. For that reason, a large number of people are suffering from malnutrition.

The production of fruits is seasonal in Bangladesh. Most of the fruits are produced in the Modhu Mash (honey month). About 54 percent of total fruits produced in the country are harvested' and marketed in the months of Baishakh, Jaistha, Ashar and Srabon. The rest 46 percent are harvested during the other 8 months. Mango, jackfruit, litchi and pineapple are the important fruits harvested during Modhu Mash. Other fruits produced during the rest of months include jujube, hog plum, goose berry, Indian apple, sapodilla, pomegranate, carambola etc. Papaya and banana are produced round the year. Research is necessary to ensure production of other fruits through out the year. It is possible to ensure supply of fruits round the year through the establishment of mixed orchard.

Meanwhile, seasonal Bangladeshi fruits are being exported to different countries of the world including the United Kingdom, Germany, Italy, France, Kingdom of Saudi Arabia, Kuwait, Qatar, United Arab Emirate, Bahrain and Oman. Exported fruits include, among others, Jackfruit, lemon, jujube, mango, hog plum, guava etc. The demand for these fruits is increasing abroad day by day. There are possibilities of exporting fruits from this country to China, Malaysia, South Korea, Japan, Singapore, Belgium, USA and Netherlands in future.

A major problem of fruit production in this country is the scarcity of modern varieties. Bangladesh Agricultural Research Institute has so far developed 40 improved varieties. Moreover, bangladesh agricultural university has developed 19 and bangabandhu sheikh mujibur rahman agricultural university has developed 2 improved varieties. They include improved varieties of mango, litchi, star apple, guava, coconut, lemon, banana, orange, papaya and jujube. These are high yielding and tasteful. But many of these HYVs are not frequently seen in the field. The extension of these improved varieties are very limited among the farmers. Moreover, there is significant yield gap between the research station and the farmers' field, which ranges from two to five hundred percent. This gap can be minimized through intensive collaboration among the research and extension organisations, and private fruit gardens and nurseries. Interested farmers should be imparted training properly on fruit production. They need to be invited to visit agricultural research stations to see recent developments there. They should be made aware of new fruit varieties and their qualities. We have a number of fruit trees that can be multiplied through vegetative propagation. In that case the qualities of mother trees remain almost the same. Farmers should be advised on this matter.

Fruit preservation, processing and marketing are important problems in our country. Farmers do not get fair price because fruit production is seasonal. Most of the time they do not get even fifty percent of the prices paid by the consumers. Many intermediaries work in the marketing channel when fruits proceed towards the consumers and they take more than a half of consumer's prices as marketing margin. Due to lack of proper preservation and processing, about 30 to 40 percent fruits are rotten every year. For that reason, imposition of restriction is necessary on fruit import during peak seasons of harvest in our country. Besides, establishment of several industries should be encouraged in the private sector for processing and preservation of fruits.

At present, there are 630 fruit processing industries in Bangladesh. Out of them, 30 industries prepare gem, jelly, fruit juice, ketchup, sauce, caned pineapple, sliced and caned mango pulp and other processed products. Some of these products are exported abroad. This type of industries should be extended further. Moreover, appropriate transportation and cold storage system should be developed for internal marketing of fruits. Besides, special care should be taken while peaking fruits from the trees. [Jahangir Alam]

Over two dozens of insect pests attack mango in the country, but only a few are considered as major pests. Of these, three species of hoppers, Amritodus atkinsoni, Idioscopus clypealis, and I. niveosparsus, are the most damaging pests of mango all over the country.

Five insect and one mite pest species have so far been reported to attack fruit, stem, leaf and inflorescence of litchi. Among these, mite, Aceria litchi, trunk borer, Zeuzera coffeae, bark borer, Indarbela tetraonis (Moore) and fruit borer, Argyroploce illepida are major pests. The litchi mites and litchi fruit borers are the most serious pests in the country.

Among the insect pests that are recorded from pomegranate, caterpillars of Punica granatum, Porthesia scientillans, and Achaea janata feed on leaves. Scale insect, lcerya purchasi sucks plant sap. The fruit borer, Virachola isocrate, is the most destructive pest of pomegranate in all parts of the country.

Caterpillars of the Elymnias undularis and Nephantis serinopa feed on leaves and are considered as minor pests. Rhinoceros beetle, Oryctes rhinoceros and the red palm weevil, Rhynchophorus ferrugineus are the two most damaging pests of the coconut tree in the country.