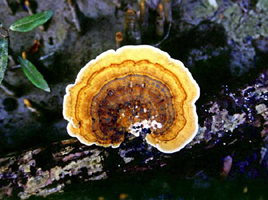 Fungus (chhatrak) group of highly heterogeneous organisms, both unicellular and multicellular. They lack chlorophyll, the green pigment responsible for photosynthesis; and are unable to produce their own food. They thus survive on living organisms or on dead organic material. About 100,000 species of fungi have been so far recorded, but the actual number may be twice as many.

The fungal flora in Bangladesh has not been fully recorded as yet. However, the hot humid climatic conditions of the country are highly congenial for them. As such, a rich fungal biodiversity is evident in the country. Many fungal plant pathogens have been described that infect major crops such as rice, sugarcane, jute, tea, potato, tomato, brinjal, chilli, wheat, maize etc.

Economically important fungi include yeast and edible mushrooms. Although these are easy to grow on available indigenous raw materials, their large-scale production has not yet been undertaken' in Bangladesh. [Zia Uddin Ahmed]