Genocide, 1971 mass killing of the people in East Pakistan by the then Pakistan occupation army and their collaborators during the war of liberation in 1971. No definite survey has yet been made to ascertain the exact number of people killed by the Pakistan army. Immediately after the War of Liberation, it was estimated to be as high as three million. The genocide committed by the Pakistan army is one of the worst holocausts in world history.

The indefinite postponement of the scheduled session of the National Assembly (due to be held on 3 March 1971 at Dhaka) and the failure of the military government of General Yahya Khan to transfer power to the elected representatives led to widespread public resentment in East Pakistan. Protest demonstrations were held in Dhaka, Chittagong and other cities. The army resorted to open fire on demonstrating crowds in different cities and towns. 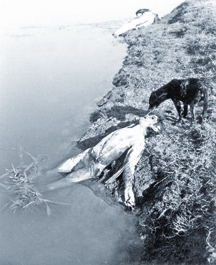 At the instance of the Awami League chief Bangabandhu sheikh mujibur rahman, civil disobedience movement was organised all over the country. The government lost grip on the administration. Genocide started with the army crackdown in Dhaka at midnight of 25 March 1971. The army cordoned Peelkhana, the headquarters of the east pakistan rifles (EPR), Rajarbagh police barracks, and the Ansar headquarters at Khilgaon. More than 800 EPR men were first disarmed and arrested, and many of them were brutally killed. A few hundred of them, however, managed to escape and later joined the liberation forces.

Pakistani forces surrounded Dhaka city with tanks and other military vehicles. Truck loads of army men spread out through the city streets for stamping out all civil resistance.

At midnight, the Dhaka University halls of residence and the staff quarters were attacked with tanks and armoured vehicles. A number of teachers, students and officials of the University were killed. A number of buildings including some newspaper offices in Dhaka were battered with mortar shells. Many people were burnt alive in the houses set on fire. Various parts of old Dhaka, including Hindu majority Mahallas such as Shankhari Patti and Tantibazar came under mortar shells. 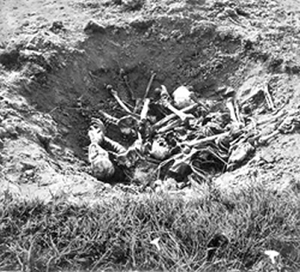 Hundreds of inmates were gunned down. It was estimated that more than 50,000 men, women and children were killed in Dhaka, Chittagong, Jessore, Mymensingh, Kushtia and other cities within the first three days of the genocide beginning from 25 March 1971. This was termed as Operation Searchlight.

Soon the Pakistan army spread out into the remotest parts of the country. In retaliation the Bangali nationalists began to organise resistance with effect from 26 March following the declaration of independence of Bangladesh. This further intensified the military action of Pakistan government. The Pakistan army started an undeclared war against the unarmed civilians of Bangladesh. They used warplanes and gunships to contain the nationalist forces. Men, women and children of hundreds of villages, cities, and towns were killed and maimed indiscriminately. Arsoning, raping and looting knew no limit. Out of fear and intimidation, millions of Bangalis left their home and took shelter in various refugee camps set up by the Government of India along the border areas.

Initially, the world could hardly know the extent of genocide due to very strong press censorship. However, from July 1971 foreign electronic and print media started reporting various aspects and ramifications of the genocide. The United Nations also expressed their deep concern about the holocaust.

In containing the freedom fighters the Pakistan government had raised paramilitary forces with the designations of razakar, al-badr and al-shams. These armed forces joined the army in killing and terrorising the people. Many people, including intellectuals of the country were lifted by them from their residence for interrogation and only a few of them returned home. They were tortured and brutally killed mostly by bayonet charges and gun-shots at the genocide camps. All these savageries were resorted to for exterminating the Mukti Bahini and their supporters. No international action was taken against the perpetrators of this most barbarous genocide according to UNO convention on genocide and the Universal Declaration of Human Rights. The genocide continued till the surrender of the Pakistan army on 16 December 1971. [Fazlul Quader Quaderi]