Hathazari Upazila (chittagong district) area 246.32 sq km, located in between 22°24' and 22°38' north latitudes and in between 91°41' and 91°54' east longitudes. It is bounded by fatikchhari upazila on the north, panchlaish and chandgaon thanas on the south, raozan upazila on the east, sitakunda upazila on the west.

Administration Hathazari Thana was formed in 1929 and it was turned into an upazila in 1983. 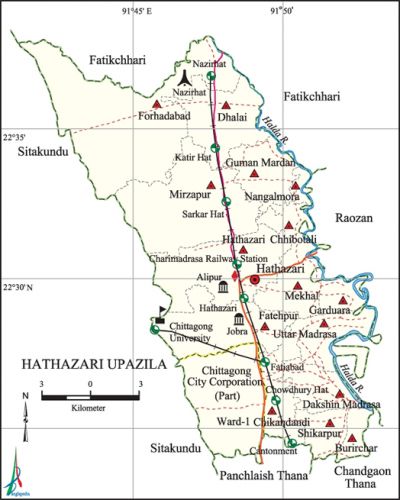 Historical events The battle of Jalalabad is a unique and glorious chapter in the history of Bengal. On 18 April 1930 a battle was fought between the revolutionaries led by mastarda surya sen and ananta singh, and the British forces at the Jalalabad Hill. During the war of liberation the Pak army brutally killed 11 freedom fighters at a place near the Nazirhat Bus stand.