Kaliganj Upazila (gazipur district) area 158.79 sq km, located in between 23°54' and 24°02' north latitudes and in between 90°26' and 92°39' east longitudes. It is bounded by sreepur and kapasia upazilas on the north, rupganj upazila and uttarkhan, and khilkhet thanas on the south, palash upazila on the east, gazipur sadar upazila on the west.

Administration Kaliganj Thana, now an upazila, was formed in 1947. Kaliganj was declared as municipality on 11 November 2010. 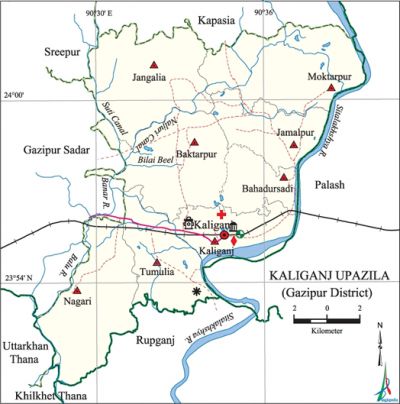 Historical events The ancestor of the Gazi Dynasty of Chaura, Karforma Sahib established settlements at Chaura after receiving jaigir from the emperor of Delhi. The Bhuiyans of Gazi Dynasty established their control over the Bhawal region from their headquarters at Chaura. On 25 July 1971 the freedom fighters destroyed Nalchhata Railway Bridge, Bandhakhola Railway Bridge and the electric pole at Tiria' of Nagari union to disrupt the movement of the Pak army. An encounter between the freedom fighters and the Pak army was held at a place near the Sombazar Canal on 18 November in which a number of Pak soldiers were killed; the freedom fighters also took control over the WAPDA Power House Army Camp, Police Station and Arikhola Railway Station Camp. On 1 December, the Pak army killed nearly 100 officers and other staff of Khalapara National Jute Mills. On 12 December the freedom fighters launched attack on the Pak army camp at Ghorashal and surrounded the Pak soldiers. On 14 December battles were fought between the joint forces (freedom fighters and the allied forces) and the Pak army at Pubail and Nalchhata; 7 Pak soldiers were killed in the Nalchhata battle and so were about two soldiers of the allied forces.