Administration Gazipur upazila was established in 1983 consisting of Joydebpur and Tongi police stations.' 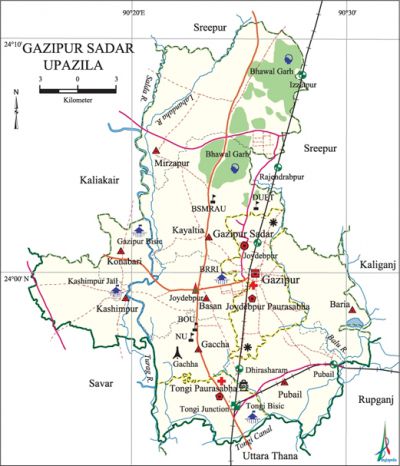 History of the War of Liberation Joydev Narayan Roy Chowdhury, the zamindar of Bhawal built his residence at Pirabari on the southern side of the river Chilai and named it Joydebpur. Kalinarayan Roy Chowdhury got the title of 'Raja' in 1878 and the residence of the zamindars of Joydebpur came to be known as the 'Rajbari' (Royal Palace). Three persons including Abdul Motaleb were killed in a resistance movement at Tongi on 4 March 1971. The Pak army killed Hurmat, Manu Khalifa (tailor), Niamat and Kanu Mia at Joydebpur and Chandana cross-road on 19 March 1971. During the war of liberation the Pak army conducted mass killing at Tongi BCSIC industrial area on 27 March, Joydebpur on 7 April, Achirpur on 17 April, Baria, Ichharkandi and Tongi High School compound on 14 May.

Natural Disasters The cyclone of 1969 caused loss of life of 20 persons at Mirzapur area. Besides, the tornado of 1991 caused death of 15 persons at three villages of the upazila.