Kalmakanda Upazila (netrokona district) area 377.41 sq km, located in between 24°56' and 25°11' north latitudes and in between 90°44' and 90'58' east longitudes. It is bounded by Meghalaya state of India on the north, barhatta and netrokona SADAR upazilas on the south, dharmapasha upazila on the east, durgapur (netrokona) upazila on the west.

Administration Kalmakanda Thana was formed in 1941 and it was turned into an upazila in 1983.

History of the War of Liberation On 26 July 1971, a direct encounter was held between the freedom fighters and the Pak army at the junction of three roads in Nazirpur union in which 7 freedom fighters were killed. 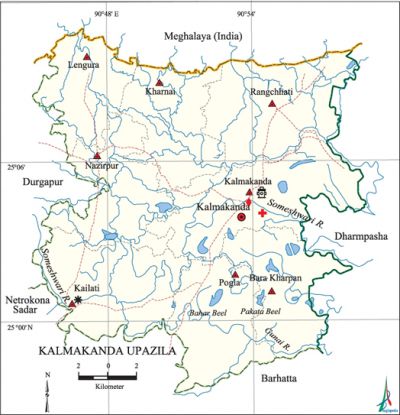 Sources of drinking water Tube-well 76.19%, tap 1.01%, pond 4.24% and others 18.56%. The presence of intolerable level of arsenic has been detected in shallow tube-well water of the upazila.

Natural disasters The floods of 1988 and 2004 caused heavy damages to settlements, livestock and crops of the upazila.