Administration Kamalganj Thana was formed in 1922 and it was turned into an upazila in 1983. 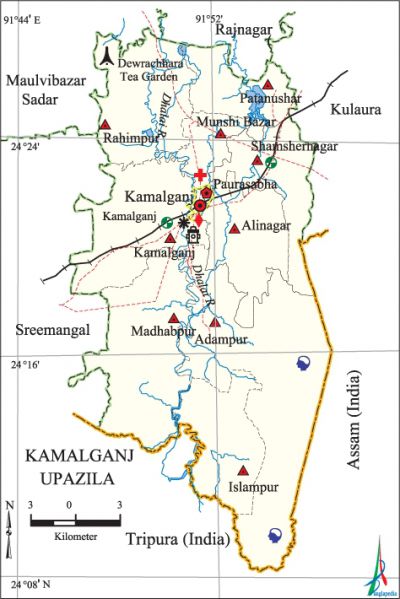 Historical events Peasant rebellion led by Panchanan Singh, Kasem Ali, Baikuntha Shwrma and Themba Singh held at Vanubal in 1307 BS. A battle between the Mughal army and the Afghan forces was fought at Patan Ushar in which the Afghan chief Khwaja Osman was killed. This area is popularly known as Khwaja Osman Garh. The peasant movement of Haor Karaiya (1968-69) stirred the whole country. During the Liberation War, fierce battle was held at Shamshernagar between the Pak army and the freedom fighters. On 29 March 1971, a huge number of Pakistani soldiers were killed by the combined attack of the EPR (East Pakistan Rifles) forces and the freedom fighters. Sipahi mohammad hamidur rahman (Birsrestha) was killed at village Aambasa.

Tourist spots The first garden of medicinal plants 'Araggakunja' has been established at Fulbari of Kamalganj upazila. Lauachhara Park, established in 1996 with 1250 hectors of land, has been declared as national park. Other tourists spots include Madhabkundu Water Fall, Madhabpur Lake, Parikunda, Monu Barrage and hakaluki haor.