Kulaura Upazila (maulvibazar district) area 431.63 sq km, located in between 24°19' and 24°39' north latitudes and in between 91°54' and 92°07' east longitudes. It is bounded by fenchuganj and barlekha upazilas on the north, tripura state of India on the south, juri upazila on the east, kamalganj and rajnagar upazilas on the west.

Historical events During the Sepoy Mutiny in 1857, about 300 Sepoys who looted the Chittagong Treasury, took shelter with the Zamindar of Pritthim Pasha, Gowsali Khan. During the non-cooperation movement of India in 1921, Purnendu Kishore Sengupta established the Vidia Ashram at Rangirkul in Kulaura. Many students of Nabin Chandra School were expelled for their involvement in the anti British movement in 1939. During this time the British allied forces established a camp at Kalapani Haor, two km northwest of Kulaura town. In 1971 the Pak army established camps in the Kulaura Hospital and in Nabin Chandra High School. During the war of liberation the Pak army killed more than one hundred freedom fighters and innocent people in different places of Kulaura upazila. 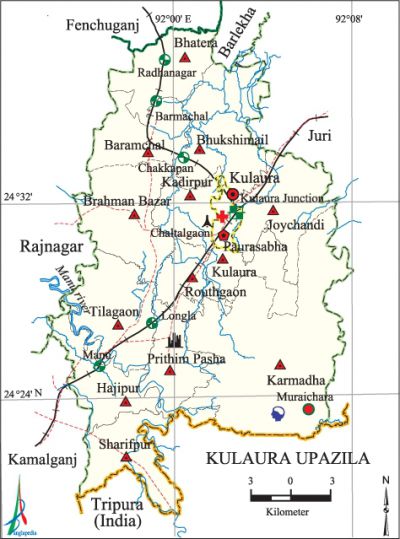 Tourists spots Notable tourist spots of the upazila include 33 tea gardens, the first Eco Park (established on 1500 acres of land) at Muraichhara (Karmadha), a number of tilas and hillocks, and rubber garden.

Natural resources Uranium, glass sand, oil (Baramchal) and natural gas have been traced in the upazila.