Administration Kanthalia Thana was formed on 6 August 1918 and it' was turned into an upazila in 1985.

History of the War of Liberation In 1971 the Pak army conducted mass killing and plundering; they also set many houses of the upazila on fire. During the war of liberation, a seriousencounter was held between the Pak army and the freedom fighters at Amua causing heavy death toll and wounding many from both sides. 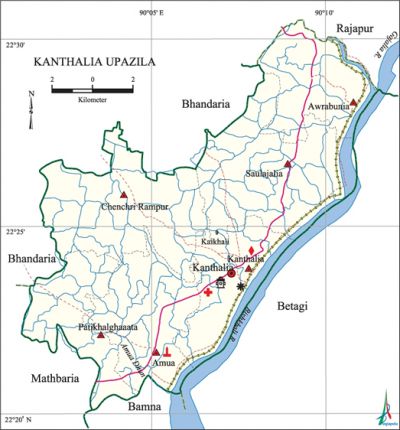 Natural disasters The courses of rivers of the region were changed due to the earthquake of 1763. Many people were victims of the flood of 1786 and the cyclones and tidal bores of 1822, 1876, 1960, 1965 and 1970. These natural disasters also caused heavy damages to settlements, livestock and other properties of the upazila.