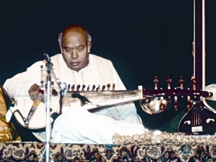 Khan, Ustad Ali Akbar (1922-2009) musician, sarod maestro, film score composer, instrumentalist. He was born on 14 April, 1922 in the village of shibpur, Nabinagar thana of brahmanbaria district. His father revered ustad alauddin khan, was the Primary court musician for the Maharaja of the princely state. His mother's name was Madina Begum. Soon after Akbar's birth his father returned to Maihar, a small princely state of British India (presently, Madhya Pradesh, India) with family and Akbar grew up there.

Akbar’s early education in music began with his father when he was three years old. Akbar learnt how to play several musical instruments. When he was nine, his father gave him Sarod for regular practice. Later, in 1933 his uncle ustad ayet ali khan gifted him a Sarod which was made by himself. Subsequently, Akbar practiced music constantly by that Sarod. Khan’s daily lessons started before dawn and often lasted 15 hours a day. He also learnt to play the tabla and the Pakhavaj from his uncle, Aftabuddin khan. During this period he met several prominent musician such as the sarodist Timir Baran and flutist Pannalal Ghosh, who came to study with his father.

In later years he joined in his lessons by his sister Annapurna Devi, who became an accomplished player of the Surbahar, and fellow student Ravi Shankar.

At the age of 13 Ali Akbar Khan, after years of rigorous training gave his debut performance at a musical conference at Allahabad in 1936. Three years later in December 1939, he accompanied Ravi Shankar on the Sarod during the latter's debut performance at the same conference and this was the first of many jugalbandies (duets) between the two musician. Khan gave his first recital on All India Radio (AIR), Bombay in 1938. In 1944, both Shankar and Khan left Maihar to start their professional careers as musicians. Shankar went to Bombay, while Khan became the youngest Music Director for AIR, Lucknow and was responsible for solo performance and composing for the radio orchestra.

In 1943, on his father recommendation, Khan was appointed a Court musician for the Maharaja of Jodhpur under Hanwant Singh. He accorded the little Ustad by Maharaja, when Hanwant Singh died in plane crash in 1948, Khan then moved to Bombay. There he won acclaim as a composer of several film scores, including Chetan Anand's Aandhiyan, Satyajit Ray's Devi, Tapon Sinha's Kshudhita Pashan, and Merchant-Ivory's The Householder for which he won the 'Best Musician of the Year' award.

From 1945 Khan started recording a series of 78 rpm disk at the HMV studios in Bombay. He conceived a new composition 'Raga Chandranandan', based on four evening ragas Malkauns, Chandrakauns, Nandakauns and kaushi Kanada. This record was a huge success in India and the raga found a worldwide audience when a 22 minute rendition was re-recorded for the Master Musician of India LP in 1965 one of Khan's seminal recordings.

'Ali Akbar Khan was the first Indian musician to record an LP album of Indian classical music in the United States and to play Sarod on American television. He performed in Boston with Shankar Ghosh in 1969 for the Peabody Mason Concert series. In 1971 Khan performed at the Madison Square Garden for the Concert for Bangladesh along with Ravi Shankar, Alla Rakha and kamala Chakravarty; other musicians at the concert included Bob Dylan, Eric Clapton, George Harrison and Ringo Starr. An album and a movie of the concert were later released. Besides, Khan has participated in a number of classical Jugalbandi pairings, most notably with Ravi Shankar, Nikhil Banerjee and violinist L. Subramaniam.

As recognition of his contribution to music he was awarded President of India Award for two times and Padmabibhusan Award (1989), Padmabhusan Award. Besides he attended as a invited artist of the ceremony of President Kennedy. In 1974 he was awarded honourary Doctorate degree by the University of Dhaka and honourary Doctorate of Literature by the Rabindravaraty University. In 1991, he received a MacArthur Fellowship. Khan received Grammy award nominations for five times from 1970 to 1998. In 1997, Khan received the National Endowment for the Arts Fellowship to practice traditional Arts. He died on 19 June 2009 in the United States. [Reenat Fauzia]