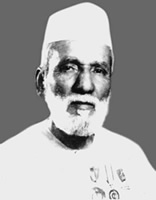 Khan, Ustad Ayet Ali (1884-1967) musician and developer of musical instruments, was born in a music gharana in the village of Shibpur in the district of brahmanbaria. He took music lessons from his elder brother, fakir aftabuddin khan, at the age of ten. He subsequently went to Maihar and took lessons in the sitar and the surbahar from his elder brother, ustad alauddin khan.

Alauddin Khan then sent him to Rampur, to his teacher, Ustad Wazir Khan, who taught Ayet Ali Khan for thirty years at a stretch. With the blessings of his guru, Ayet Ali joined the court of Maihar State as a court musician. Along with his brother, he formed an orchestra with indigenous musical instruments. At the invitation of rabindranath tagore, he joined santiniketan in 1935 as the head of the department of instrumental music. Ill health, however, obliged him to give up the post and return to Brahmanbaria.

Ustad Ayet Ali Khan’s guidance and encouragement helped a host of classical musicians to establish themselves in the world of music.

He established a workshop for manufacturing musical instruments. He developed two new musical instruments, the manohara and the mandranad, and also improved the surbahar and the sarod. Another instrument, which he developed on the advice of Ustad Alauddin Khan, was the chandrasarang. He also invented a number of ragas: Varis, Hemantika, Aol-Basanta, Omar-Sohag, Shiva-Behag, Basanta-Bhairon, Mishra Sarang etc.

Ustad Ayet Ali Khan founded the Alauddin Music College at comilla (1948) and Brahmanbaria (1954). He regularly performed the surbahar on Radio Pakistan from 1951 to 1965. He also participated in classical music conferences held in different cities of India. In 1960 he received the Governor's medal for his extraordinary contributions to the field of music. He was given the Tamgha-i-Imtiaz in 1961 and the Pride of Performance Award in 1966 by the Pakistan Government. He was honoured with the Bangladesh Shilpakala Academy Award and the Independence Day Award posthumously in 1976 and 1984 respectively. [Mobarak Hossain Khan]