Khumee an ethnic tribe of chittagong hill tracts migrating originally from Myanmar. According to Historian Ramesh Chandra Majumder, Khumees belong to Mongoloid race and most of them live in Thanchi, Roangcharri and Lama upazilas of Bandarban district and Arakan region of Myanmar. WW hunter said that the migration of Khumees from Myanmar to the Hill Tracts took place in late 17th century. According to the census report of 1919, there was only 1,241 Khumees in the Chittagong Hill Tracts region.

Anthropologically, Khumees belong to the mongoloid race. Accordingly their physical features include fair complexion, flat nose, small eyes, and enlarged knees and foot. Males have a few beards on the chin. They live in groups making huts on hills by bamboo and leaves available there. They also make houses on branches of tree. They select a leader to lead their concerned group. Everybody respects and obeys his order. They maintain secrecy of all their internal affairs strictly. Khumees are respectful to the state laws and the Bomong Raja, who rules Bandarban. There are two groups in Khumees- Aowa and Afia.

Khumees do have their own language, but it has no alphabets. The language, being used by them from generation to generation, belongs to the southern Tibeti-Burman language family. In this language, 'Kha' means 'better' and 'Mee' means 'human being'. So 'Khamee' means a better human being. It is assumed that 'Khumee' is a corrupt word of Khamee and the transformation took place over the centuries. 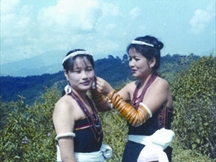 Khumee tribe is male-dominated and they give priority on their male family line. However, intra-line marriage is completely prohibited in their society. But, there is no restriction on pre-marriage mixing of bride and groom. Before the wedding, a cock is sacrificed to determine the luck of the couple as a custom. A heavy feast is organised to entertain the guests on the wedding day. There is no provision of divorce in their society.

Rice is the staple food of Khumees and for the livelihood they depend on jhum cultivation. Traditionally they produce paddy, chilly, tobacco, turmeric, ginger, vegetables etc. Now a days, fruits like mango and banana are also produced in this method. They like meat of various animals, specially dog. Most of them are habituated to drink wine, which they brew in home with rice. They also like to smoke cigars and take tobacco. Khumees are good artisans.

They make all the required household goods by themselves with bamboo and cane. At present, they do try to send their children to school. Many NGOs provide them with jobs after giving them some education.

Khumee women wear dress woven and tailored by themselves, whereas the males wear short Nengti. However, during the festival, they attire traditional costumes, basically designed by themselves and woven in their own looms. Young Khumee women are used to make up themselves with ornaments of indigenous design made of silver, brass, copper and beads.

Birth of a child in a khumee family is considered as a holy event and divine blessing. Female members of a family perform various rituals centering the conceived lady till delivery. The naming ceremony of the newborn baby is held after the healing of the umbilical cord. Generally, a baby is named after his/her ancestor's name. Ears of both Khumee boys and girls are perforated during the childhood. Their heads are also shaved to remove hairs as a part of social ritual. Corpse of a deceased is kept inside the house for a period of four to five days before the funeral. It is believed by Khumees that this ritual minimises the punishment after death. After the cremation, they keep the body ash and the deceased's used cloths and other belongings in a house near the crematory with a hope that the soul would return soon there. After one year of death a funeral feast is organised by the family to entertain others.

Khumees are followers of Buddhist faith. However, materialism and naturalism are very much dominated in their rituals. They worship stones, mountains, fountains, rivers consorting those as gods beside the Creator or God Pathian. They offer worship to the god of water throughout the year. A special worship Navanna puja is offered twice a year seeking good crops before cultivation.

Both Khumee males and females together perform a traditional dance, known as Lamnah. Only young Khumee males participate in a victory dance called Charanah. They also perform a dance during funeral procession playing two indigenous musical instrument known as 'Along' and 'Atong'. They have a rich collection of folk tales and folklores preserved orally from generation to generation. Khumees celebrate the year-ending festival welcoming the Bengali new years day through colourful programmes like the mainstream Bangali population. [Muhammad Abdul Baten]