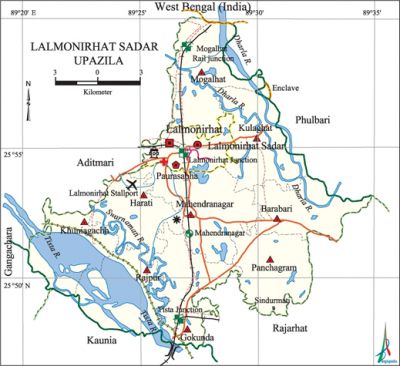 History of the War of Liberation In 1971 Lalmonirhat Sadar was under Mogalhat Sub-sector of Sector 6. On 4 April the Pak army took possession of the Lalmonirhat Airport. On 5 April, the Pak army, in collaboration with the Beharis sacked the area. On 9 November the Pak army captured a number of persons and killed them at the premises of the Araikhamar Dakbangalow. During the war of liberation the Pak army killed many Bangali Railway officers and staff. The Pak army was forced to leave Lalmonirhat on the face of the heavy attack by the freedom fighters on 4 and 5 December. Lalmonirhat was liberated on 6 December.

Natural resources Quality stone with silicate and manganese, akaric (raw) iron and oil mine have been traced in the upazila.