Administration Manda Thana was formed in 1943 and it was turned into an upazila in 1987. 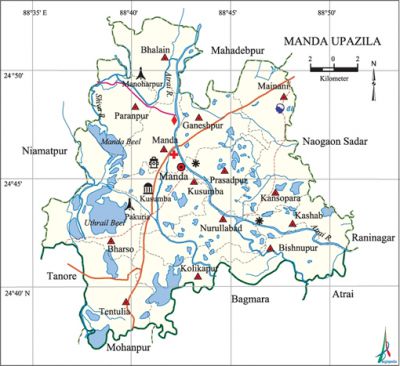 History of the War of Liberation In August 1971 the Pak army killed 128 persons at village Pakuria under Bharso union of the upazila and buried them in a mass grave. Besides, the Pak army conducted mass killing and heavy plundering in the upazila and also set many houses on fire.

Hats, bazars and fairs Hats and bazars are 30, fairs 5, most noted of which are Chaubadia Hat, Shabai Hat, Deluabari Hat, Sati Hat and Prasadpur Hat.

Natural disasters Many people were victims of the famine of 1770 (popularly known as manvantar of 1176, BS) and the epidemic following the floods of 1962 and 1995.