Manipuri, The an ethnic community in Bangladesh. Their original home is Manipur, once a sovereign state and now the northeastern zonal state of India.

In the early days, Manipur had different names such as Kyangleipak, Kyangkleipang, Kyanglei, Meitrabak, and Mekhali and the Manipuris were known as Meitei. During the reign of Maharaj Garibniwaz (1709-1748), some missionaries arrived here from sylhet. There was an opinion that these missionaries named this land 'Manipur' and its principal inhabitants, Manipuris. The mahabharata has a mention of Manipur and the missionaries but as it was discovered later, Manipur of Mahabharata and Manipur of Sylhet were not the same place. Manipuris migrated to the Bangladesh area and settled here at different times due to wars, conflicts and other socio-political reasons.

Their migration started during the reign of Rajarshi Bhagyachandra (1764-1789) and the process was accelerated by the Manipur-Burma War (1819-1825), which is a black chapter in the history of Manipur. After the war with Burma, Manipur was ruled by the Burmese invaders for about seven years. During that period, King Chourajit Singh along with two younger brothers, Marjit Singh and Gambhir Singh took refuge in Sylhet. A hoard of Manipuri subjects followed them. A palace was built at that time at Mirzajangal of Sylhet town. 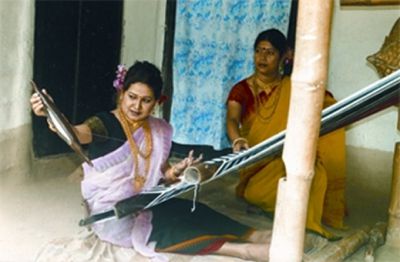 kasba of Brahmanbaria, Durgapur of Mymensingh, and Tejgaon of Dhaka became Manipuri settlements during this period. However, these places are not special Manipuri settlements at present. Most Manipuris now live in Sylhet town and its suburbs, and kamalganj, sreemangal, kulaura and barlekha thanas of maulvi bazar district; chunarughat thana of habiganj district, and chhatak thana of sunamganj district. According to the 1991 Population Census, there are about 25,000 Manipuris in Bangladesh. Of them about 13,000 are in Maulvi Bazar, 7,000 in Sylhet and 4,000 in Habiganj.

Ethnologically, Manipuris belong to the Kuki-Chin group of the Tibeto-Burman family of the Mongolian race. But a good admixture of Aryan and other blood groups also took place in the mainstream of Manipuri nation. Because of its special geographical location and as a result of several religious and political interactions, Manipur became the melting point of different ethnic groups and cultures from the time immemorial. This assimilation resulted in the formation of the modern Meitei people who are now widely known as Manipuri.

Meitei Lon or Manipuri language, the mother tongue of the Manipuri people, belongs to the Kuki-Chin group of the Tibeto-Burman sub-family of the Mongolian family of languages. Manipuri literature is very old. It has a rich and variegated history and traditions. Manipuri language is now the state language of Manipur and is recognised as one of the national languages of India.

A characteristic feature of the old Manipuri script is its each and every alphabet named according to a limb of human body. Their shapes are also in consonance with those of the limbs. The script was substituted by Bengali script in the 18th century during the reign of Raja Garibniwaj to forge a closer relation with the newly preached Chaitanya School of Sanatana Dharma which originated in Bengal. Marriage ceremony of the Manipuris

Manipuri culture has a rich and colourful tradition. Dance and music play a vital role in the life span of Manipuri people. The most flourishing branch of Manipuri culture is dance. The Manipuri synonym of dance is jagoi and in this dance, body movements create either circle or ellipse. Rasa dance is the finest product of Manipuri culture. Maharaj Bhagyachandra innovated it and it was first performed in Manipur in 1779 in the fullmoon of Kartik. Variations of Manipuri dance can be grouped into two broad classes: folk dance and shastriya or classical dance. Manipuri folk dance includes Laiharaoba, Khamba-Thoibi, Meibi Jagoi and Leisham Jagoi, while Rasa, Gostha leela, Udukhol and Mridanga fall under the classical group. Manipuri dance was brought to the horizon of outside world by Rabindranath Tagore. He first witnessed the Manipuri dance in a visit to Sylhet in 1919. Soon, he introduced teaching of the dance at santiniketan. 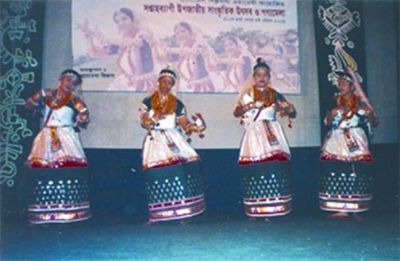 Manipuri dance is characterised by its lashya (gentleness), tenderness, and devotion. Laiharaoba is full of sweet elegance, grace and a gesture of dedication. Thyang-Ta, Mridonga Nritya and some forms of Shri Krishna Nartan display boundlessness of the emotions of life. Khamba-Thoibi dance demonstrates a balanced combination of Tanva (forceful form) and lashya.

Almost all Manipuris are now the followers of the chaitanya cult of Sanatana Dharma. But before accepting the Sanatana Dharma in the 18th century, Manipuris practised Apokpa Dharma. They, however, did not altogether renounce their earlier religious beliefs. Their rites and rituals reflect a synthesis of the old and new beliefs. Manipuris observe with great grandeur the religious ceremonies of Sanatana Dharma like rathayatra, Rasa Purnima, Jhulanjatra and also those of their traditional culture such as Laiharaoba and Sajibu Chairaoba and worship household deities such as Sanamahi, Pakangba, and Leimaren. Many Manipuris now follow the teachings of islam also. They are known as Meitei Pangon or Manipuri Muslims. Rites, rituals and beliefs are part and parcel of the day to day life of Manipuris. They observe special religious ceremonies and customary rituals on major occasions of life such as birth, marriage and death. [AK Sheram]