Marma, The an ethnic group in Bangladesh, the Marmas live in the three hill districts of Rangamati, Bandarban and Khagrachhari. Some Marmas, however, live in the coastal districts of cox's bazar and patuakhali. They call themselves rakhain. Many consider them as a separate ethnic community. Presently the number of Marmas in Bangladesh is about 350,000.

Marmas belong to the Mongoloid race. They are relatively short and have prominent cheekbones. They have yellow complexion, black hairs, small eyes, and snub noses. 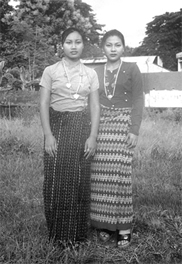 They speak in Arakanese dialect and their language is written in Burmese characters. Marma language belongs to the Burma-Arakan group within the broad classifications of Tibet-Burma languages. In recent times, Marmas in urban areas and nearby settlements speak the corrupt local language of Chittagong.

The word 'Marma' originates from the Burmese word 'myanma', which means 'Burmese nationals' and is pronounced as marma by the people of the chittagong hill tracts. The ancestors of the Marma people used to live in Pegu city of Burma long before it was invaded in 1599 by Mahappinnagi, the commander of the Army of the king of arakan. The people of Pegu were known as Talaing or Tai Luang meaning greater Tai, a branch of the great Tai race, which, according to some historians, lived in southern and central China as early as 2200 BC. Some researchers opine that the Buddhists of Arakan now known as Marmas and maghs are the same group of people. The Marma people of Chittagong Hill Tracts, however, do not like to identify themselves with Maghs. They consider that Maghs were originally pirates and that Marmas, far from being pirates, hated this occupation.

Marmas are divided into several clans. Each clan is named after the place from where it migrated. The material culture of the Marma society includes many basic tools and weapons of primitive societies.

The houses of Marma people are made of bamboo, wild grass and straw. These are built on elevated bamboo or wooden platforms (machang). Every room of the house is a bed room-cum-store. The space underneath the machang is used for various purposes such as keeping livestock, storing fuel wood, or accommodating handlooms for weaving. Some houses, however, are made of mud and built without machangs. Rice and boiled vegetables are major food items of the Marma people. ‘Nappi’ a paste of dried fish, is a favourite. They enjoy rice bear and smoke indigenous cigars.

Marma men and women typically wear ‘thami’ (sarong) and ‘angi’ (blouse). However, the angi used by the men is more a waistcoat than a blouse. Marmas make their own dresses using traditional weaving technology, although many now purchase common Bangali dresses from the market.

They usually do not wear shoes, but this tradition, too is not in vogue now thanks to increased association with other peoples. Kitchen utensils in a Marma family are mostly earthen or made of bamboo and wood. Many families, however, use aluminum wares like pots, pans, plates and glasses. Marma men drink wine and play card games in leisure time. 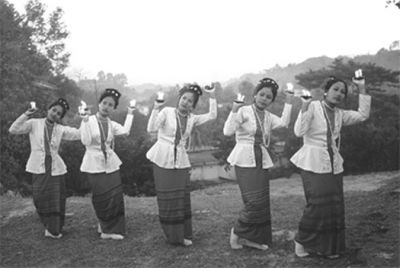 The nuclear family is predominant in the Marma community. Although the husband is the head of the household, the wife also has a significant role in the family. kinship ties are quite strong in the Marma society. Such ties are both affinal and consanguineous. The property inheritance, in general, follows the old Burmese line of inheritance called Thamohada. Both sons and daughters inherit parental properties. The 'auroth' (most favourite) child gets the ownership of the house and has to take care of the parents. In recent times, however, inheritance of landed property follows a rule according to which the property is distributed in the ratio of 2:1 between sons and daughters.

agriculture is the main occupation of Marmas. jhum cultivation is their primary agricultural pursuit. They also supplement their food requirement by gathering tree leaves, roots, and tubers from hill forests. Small-scale homestead gardening is also common among them. Other important economic activities of Marmas include basketry, brewing and wage labor. Weaving is a very common activity of Marma women. Marmas were not market oriented in the past. Their economic activities and production system were geared to their subsistence. Only recently have they become involved in trade and commerce. Produces of the Marma people are sold mostly through middlemen. Some Marma families now operate small retail stores.

Marmas believe that their birth, death and all activities in life take place under the influence of a supernatural power, which they try to satisfy through their rites and rituals. They are Buddhists in faith. Animism is also in practice among them. They perform all the important Buddhist religious festivals and also various rituals and worships to satisfy different gods. Dreams have a very strong influence in decision making in their everyday life.

Marriage is a very important part of the social life of Marmas. Cross cousin marriages and monogamy are predominant features of this society. Polygamy is also allowed. Child marriage is practically forbidden. Pre-marriage love is common. Both men and women have equal rights to divorce although the final settlement is to be made in the court of karbari (village leader) or of the headman (mouza or area leader).

The traditional political administrative system in the Marma community is a three-tier one. Village level administration is headed by a karbari. The mouza level is headed by a headman and the circle level is headed by the circle chief (Raja). The main responsibilities of the village karbari, the mouza headman, and the circle chief are collection of jhum tax. In addition, each is entrusted with various socio-cultural responsibilities including mitigation of disputes, pronouncing judgments, and maintaining law and order at their respective levels of administration. [Sadat Ullah Khan]