Mollahat Upazila (bagerhat district) area 187. 88 sq km, located in between 22°48' and 22°59' north latitudes and in between 89°40' and 89°57' east longitudes. It is bounded by kalia upazila on the north, fakirhat and chitalmari upazilas on the south, Chitalmari, tungipara and gopalganj sadar upazilas on the east, terokhada and rupsa upazilas on the west.

Administration Mollahat Thana was formed in 1867 and it was turned into an upazila on 2 July 1983. 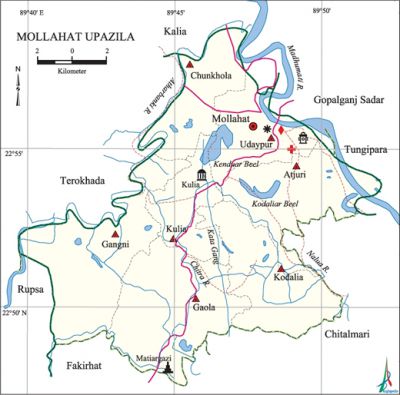 Historical events There was an artificial scarcity of cotton yarn for production of fishing nets due to black marketing and other reasons in 1943-44. As a result the fishermen were jobless and they organized a movement. During the war of liberation in 1971 a battle was fought between the freedom fighters and the Pak army at Chakulia in which about 200 Pakistani soldiers including a Captain were killed.'

Marks of the War of Liberation Memorial monument 1 (Chakulia).