Administration 'Nagarkanda Thana was formed in 1906 and it was turned into an upazila in 1984. 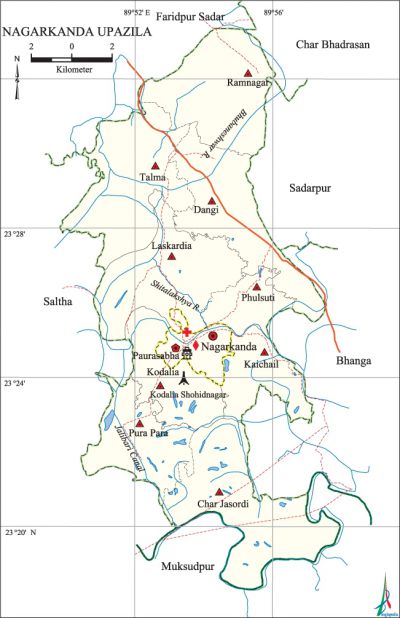 History of the War of Liberation The freedom fighters raided the Nagarkanda Police outpost on 22 April 1971 and captured a huge number of arms and ammunitions. The Pak army conducted mass killing and plundering at village Char Jasordi on 30 April; they also set many houses of the village on fire. On 4 May the freedom fighters attacked the Nagarkanda Police Station and captured arms and ammunitions; they also killed the Pak collaborator Police Inspector. On 30 May the Pak army set five villages, from Kodalia to Bagat, on fire and killed 18 innocent persons. On 31 May the Pak army fired from helicopter and set 9 villages on fire. An encounter was held between the freedom fighters and the Pak soldiers at the Razakar camp at Talma Bazar in which 8 razakars were killed. The freedom fighters launched an attack on the Pak Military camp at Nagarkanda in which a number of Pak soldiers including some razakars were killed and so was one freedom fighter.'

Marks of the War of Liberation Mass killing site and mass grave 1 (Kodalia).