Administration Faridpur Sadar Thana was formed in 1896 and it was turned into an upazila in 1983. 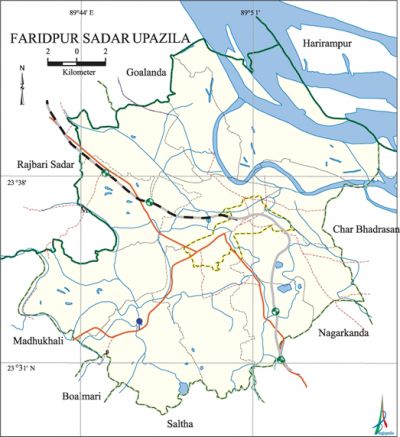 History of the War of Liberation The Pak army established camp at Faridpur Stadium on 21 April 1971. They killed 8 Brahmacharis of the Jagabandhu Ashram at Sree Angan and set the Ashram on fire. On 2 May, the Pak army brutally killed 34 persons at Sarkar Bari of' Ishan Gopalpur. A battle between the freedom fighters and the Pak army was held on 9 December at Karimpur bridge of Kanaipur in which 60 Pak soldiers were killed and so were 11 freedom fighters. One freedom fighter was killed in an encounter with the Pak army and the Beharis at Momin Khan Hat on 14 December.

Natural Disasters The cyclone, originated from the eastern region of meghna, of 9-10 and 30-31 October 1960 caused huge damages to settlements, livestock and crops of the upazila. The eastern part of the upazila is under constant threat due to river erosion.