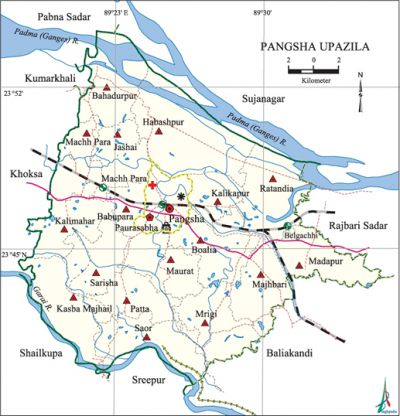 Historical events Bhairab Babu of Babupara union organised indigo resistance movement in 1860. The khilafat movement, which started in 1920, was widely organised in the area under the leadership of the eminent writer Yakub Ali Chowdhury. During the war of liberation in 1971 the Pak army killed many people of the villages Machh Para, Ramcole and Mathurapur; they also set many houses of these villages on fire.

Marks of the War of Liberation Mass killing site 2 (on the bank of Chandana River adjacent to the Pangsha College).

Hats, bazars and fairs Hats and bazars are 6, fairs 3, most noted of which are Bagduli Hat, Pangsha Hat, Habaspur Mela and Shashanbari Mela.