Administration Phulbari Thana was formed in 1857 and it was turned into an upazila in 1984. 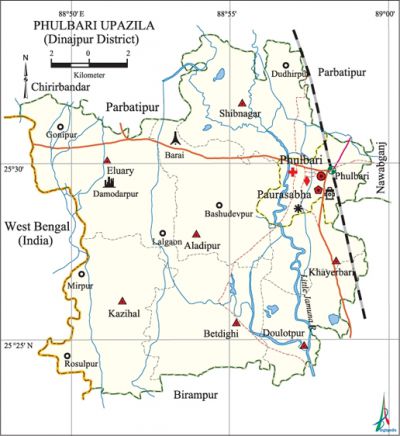 Historical events In 1947 tebhaga movement' was held under the leadership of Shamsuddin Ahmed and Rup Narayan in this upazila. On 29 March 1971, an encounter was held between the freedom fighters and the Pak army on the Dinajpur road in which the freedom fighters destroyed a number of military vehicles and captured huge amount of supplies including arms and ammunitions of the Pak army.

Marks of the War of Liberation Mass grave and mass killing site 1 (Barai); memorial monument 1 (at the premises of Sujapur High School).

Natural resources' Coal mine has been discovered in this upazila in 1997.