Phulbari Upazila (kurigram district) area 163.63 sq km, located in between 25°32' and 26°04' north latitudes and in between 89°28' and 89°40' east longitudes. It is bounded by west bengal state of India on the north, kurigram sadar, rajarhat and lalmonirhat sadar upazilas on the south, nageshwari upazila on the east, Lalmonirhat Sadar upazila on the west. This upazila has 3 enclaves.

Administration Phulbari Thana was formed in 1914 and it was turned into an upazila in 1983. 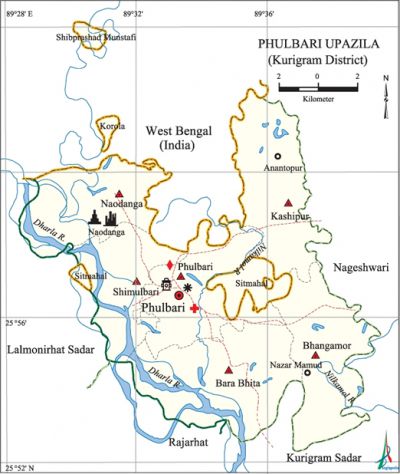 History of the War of Liberation On 27 March 1971, an encounter was held between the freedom fighters and the Pak army in which freedom fighter Lutfor Rahman (a member of the EPR) was killed.

Hats, bazars and fairs Hats and bazars are 16, most noted of which are Balar Hat, Phulbari Hat, Kharibari Hat and Ganga Hat.

Natural disasters Many people were victims of the famine of 1974. Besides, the flood of 1988 caused heavy damages to settlements, crops and livestock of the upazila.