Kurigram Sadar Upazila (kurigram district) area 276.45 sq km, located in between 25°45' and 25°55' north latitudes and in between 89°34' and 89°50' east longitudes. It is bounded by phulbari (kurigram) and nageshwari upazilas on the north, ulipur upazila on the south, assam state of India on the east, rajarhat upazila on the west.

Administration Kurigram Sadar Thana, now an upazila, was established in 1874. 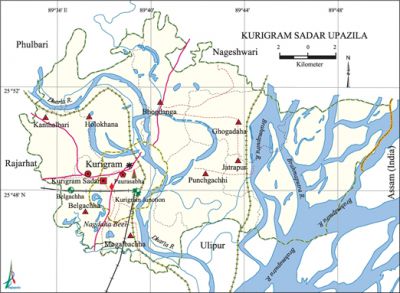 Marks of the War of Liberation Mass grave 5 (Kanthalbari, Jail gate, place on the south of the residence of Mohi Bepari, in front of the bungalow of SP, beside the residence of Doctor Safar); martyr memorial plank at Ghoshpara; victory memorial monument at the turn of the College.

Hats, bazars and fairs Hats and bazars are 24, fairs 7, most noted of which are Kanthalbari Hat and Jatrapur Bazar.