Administration Purbadhala Thana was formed in 1917 and it was turned into an upazila in 1983. 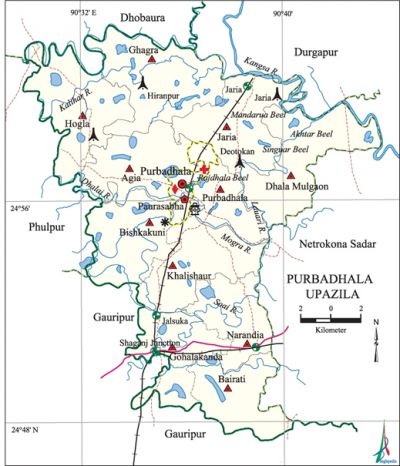 Historical events The founder of the Pagalpanthi doctrine Karam Shah and his son Tipu Shah settled at village Latirkanda of this upazila in 1792 and led the pagal panthi movement and peasant movements. Since 1786 they organized anti British movement in alliance with fakir-sannyasi resistance. The Pak army entered into Purbadhala for the first time on 29 April 1971. On 1 May the Pak army brutally killed noted physician Dr. Hem Bagchi, his brother-in-law Haridas Sinha and their service assistant Meghu at the courtyard of their residence.

Marks of the War of Liberation Mass grave 1 (Trimahani).

Natural disasters 18 members of the Ansar were dead and 81 were seriously wounded due to the tornado of June 1975; it also seriously damaged the Ansar Camp of Jaria.